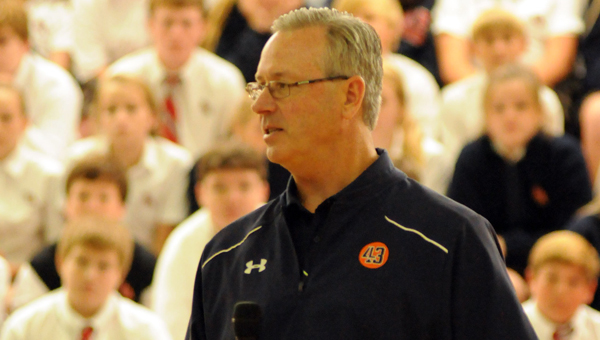 Mike Lutzenkirchen urges Fort Dale Academy students to make good choices. During a talk about his son, Philip, Lutzenkirchen explained that a lifetime of good choices can be undone with one bad choice. (Advocate Staff/Andy Brown)

Philip Lutzenkirchen was a standout on the Auburn University football team. In his four years on the Plains, the Marietta, Ga., native was a two-time team captain and a three-time Academic All-American that graduated with a degree in communications in just three and half years. He set a school record for tight ends with 14 career touchdowns, one of which gave his Tigers a 28-27 come-from-behind victory over in-state rival Alabama in 2010.

But it isn’t Philip’s accomplishments at Auburn that Mike wants the students to remember. Instead, he wants them to remember that one bad decision can erase a lifetime of good.

It’s a fact that Mike has been living with for a 478 days.

On June 29, 2014, Philip was killed in an automobile accident. He and his friends had been drinking heavily before deciding to make a run to a convenience store at around 2 a.m. Philip chose not to wear his seatbelt and was ejected from the vehicle in the crash.

A series of poor choices ultimately cost Philip his life — a life he had dedicated to helping others.

On Monday, Mike shared a story from Phillip’s senior year in high school, when he told a girl named Casey, who was born with Down Syndrome, that he would take her to prom. Phillip ended up having to attend an awards ceremony on the night of prom and was unable to take Casey. The next year, during his freshman year at Auburn, Phillip sustained a concussion, but insisted his dad drive him back home to Georgia so that he could take Casey to prom.

It was an example of how Phillip made himself available to people.

In another example, Phillip put off heading down to Panama City Beach for spring break with his teammates to drive back to Georgia to visit with a young lady who had been diagnosed with cancer.

“He put off going to spring break with his friends to spend a little time with her,” Mike said. “Here he is at 21 years old talking to this little girl about what she is going through. She was worried about how she would look after a surgery that would have to amputate her right leg above the knee. She had options, but both called for amputation. One, however, would allow her to continue playing sports, but she was worried about how she would look. I learned later from her father that they decided to do the radical surgery, so she could still play sports because of what Phillip said to her. She told me that Phillip didn’t say much he just said ‘Who cares what people think.’”

“I promise you this,” Mike said. “It doesn’t matter if you are black or white. It doesn’t matter if you are a boy or girl. It doesn’t matter if you’re the best athlete in the school or the least athletic person in the school. I don’t care if you have a 4.0 or a 2.0. When you make a series of poor decisions in a compressed time frame, there is no discrimination. Philip had the world at his fingertips. He was talking to the SEC Network about becoming an on-air voice, and he’s gone because of poor decisions. There is no discrimination. I know. I’m living it. “Phillip was a model citizen. That didn’t matter that night. The decisions they made in a 24-hour span cost him and one other boy their lives.”