Homecoming prank may result in charges being filed 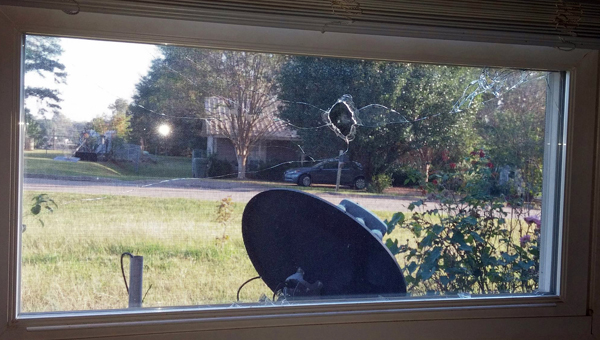 The bedroom window of Lucrecia Middleton’s house was shot with a BB gun during what she described as a homecoming prank associated with Greenville High School’s homecoming. She said she has filed charges with the Greenville Police Department. (Submitted photo)

That’s the message one parent of a Greenville High School student is trying to spread after her home and two of her vehicles were damaged during what she described as a “homecoming prank.”

“I heard a noise (last) Monday night at 1 a.m., and opened my front door and was forced back in due to shots being fired my way,” said Lucrecia Middleton. “The sound of BBs flying let me know it was a group and very close! They had no disregard of shooting me. They shot my dog. My bedroom window was shot out of my house. My son’s windshield in his truck was shot and has two big holes in it. My husband’s truck had every kitchen condiment inside and out put on it. They also rolled my house, which I didn’t have a problem with, but the shooting was too much!”

Middleton said she filed charges with the Greenville Police Department.

The prank may result in charges being filed against the students found to responsible, said Greenville Police Department Capt. Justin Lovvorn.

Lovvorn, who heads the department’s investigations unit, said the incident is being investigated by the school resource officers.

“They are looking into it to see who may have done it,” he said. “They know the kids pretty well and usually get some good information.”