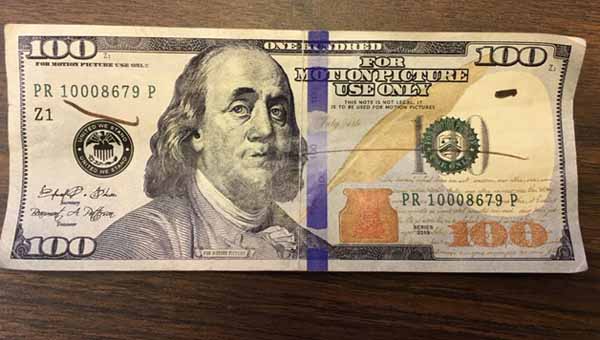 CONTRIBUTED PHOTO
A fake bill was recently passed at a Crenshaw County business. Sheriff Mickey Powell asks businesses to be on the lookout for similar bills.

“The secret service tells me that this particular note has been in the public for about two years now and we’re just getting them here,” Sheriff Mickey Powell said. “We’ve seen three in the Highland Home area at First Citizens Bank and one has been passed in Greenville.”

The bills resemble authentic currency, but there are several discrepancies.

“You can tell by the texture of the paper that it’s not real. The paper has got a slick feel to it,” Powell said.

The bills also say, “For motion picture use only” on its front and back. Because the bills are plainly marked, Powell said the Secret Service does not consider them counterfeit.

“They’re calling it a novelty,” he said.

The sheriff’s office has identified persons of interest and will be questioning them in the coming days. Powell said the investigation would determine the charges filed.

Law enforcement asks that businesses be cautious and attentive to the currency they are given and use the pens available for identification. Like most counterfeit, these bills will show a dark mark when checked.