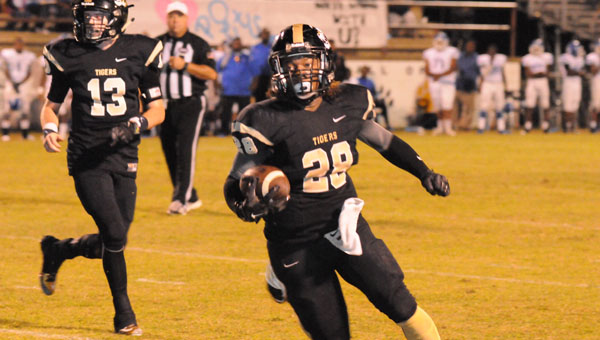 When the Poets refused to leave the field so the homecoming court could be presented to the fans, the Greenville Police Department was forced to step in. However, it was the fifth-ranked Tigers that ultimately ran the Poets (3-5) off the field.

The Tigers used a punishing ground game, led by senior running back Dequarius Peterson, to notch a 33-21 win and improve to 7-0 on the season.

Peterson ran for four touchdowns, including a 1-yard score with 4:42 to play in the game to give the Tigers a 26-21 lead.

“He’s physical,” Greenville head coach Josh McLendon said. “He runs hard and they get tired of trying to tackle him.”

Peterson finished the game with touchdown runs of 2 yards, 35 yards, 1 yard and 4 yards.

The first came with 6:14 to play in the opening stanza when senior defensive end Marlon Davidson snagged a James Foster pass and rumbled 20 yards for the score. Senior Antonio Alvarez added the point after attempt to give Greenville a 7-6 edge.

Early in the second quarter an interception by senior defensive back Mark Bradley led to Peterson’s first scoring run and a 14-6 Greenville lead. Late in the fourth quarter Bradley recovered a fumble on a kickoff to set up Peterson’s final touchdown run.

“Defense and special teams was big,” McLendon said. “They made plays all night.”

McLendon has the Tigers off to their best start since 2009 when Ben Blackmon led Greenville to an 11-0 start. (In 2011, a Wetumpka High School win over Greenville in the season opener was forfeited giving Greenville an 11-0 start to the season.)

“We’ve just got to keep taking it one game at a time,” McLendon said. “This one was big. I’m so proud of these guys. We knew this would be a tough game. Sidney Lanier has a bunch of athletes. We had all the distractions with homecoming and a different schedule today, but our guys came out and fought. I was proud that every time we got down, they battled back. This was a good win.”

Greenville will be back in action next Friday when it takes on Eufaula High School in Eufaula. Kickoff is set for 7 p.m.