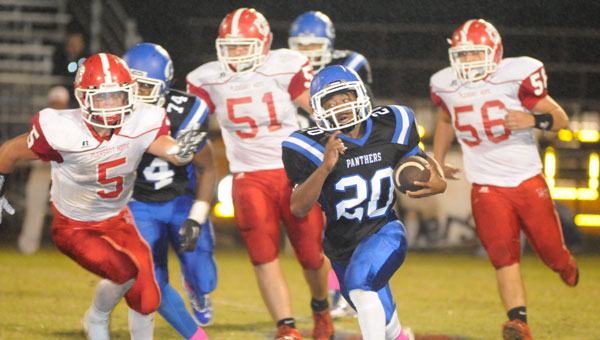 Junior Derrick Johnson Jr. was one of several Panthers who kept the Pleasant Home Eagles on their heels as Georgiana surged to a 40-0 shutout for the final home game of the season.

It was a no-fly zone for the Pleasant Home Eagles at either end zone as the Georgiana Panthers thwarted every effort to score with a 40-0 shutout.

Pleasant Home head football coach Chris Mason said that, despite steady, methodical drives at the top of both halves into Panthers territory, the Eagles just gave out of gas at the finish line.

“Our offense is a run-based offense, and what we preach is that we can’t go backwards,” Mason said.

“When we go backwards—penalties, negative plays—it puts us in a situation where we have to throw the ball. And we get down there in the end zone and that’s been the story of our season.  Almost.  The word of the year has been almost.”

Meanwhile, the Panthers had little difficulty in moving the ball all evening as the team celebrated senior night; interestingly enough, it was the younger stars of the Panthers’ team that often carried the load.

Freshman running back Christian Williams was the first to strike on an ad-libbed reverse that put the Panthers well within Eagle territory.

Sophomore Cameron Longmire finished the one-two punch with a nine-yard touchdown run with 9:36 remaining in the first quarter.

Georgiana head football coach Ezell Powell said that he thought his younger players did a good job of sending seniors off with a shutout in the final home victory.

“I’ve been telling people for a long time that we’re a young football team, and we have some talented young players,” Powell said.

“Before I came out here, I told them to play for your seniors, because one day you’ll be in those shoes and you’ll want those kids playing as hard as they can for you.”

On the following drive, a harrowing Panthers defense forced the Eagles into a very long third down situation, resulting in a deep throw into double coverage and an interception by Panther Geron Feagin.

Williams caught a short dump pass on the ensuing drive and took it 44 yards untouched down the sideline for the Panthers’ second score of the night.

A multitude of Panthers proved the depth, breadth and versatility of the team’s offense, quickly mounting a 32-0 lead at the half.

“We’re a balanced football team when we can execute,” Powell said.

“We have enough guys at the skill positions that make it so you can’t focus on just one of us.  When we’re playing well and blocking well up front, we can compete with anybody.”

Despite the tough loss, Mason said that there was no time for the Eagles to dwell on it.  Next week’s opponent—the Red Level Tigers—will prove challenging enough.

Powell said that next week’s opponent would similarly prove no walk in the park.

But the potential prize for the Panthers is enormous.

“Kinston is another region game that we need to win to keep ourselves in the driver’s seat not only for the first round of the playoffs here at home, but the area championship,” Powell said. “I really haven’t said a whole lot about it, but I would really love to see these seniors go out as area champs this year.”