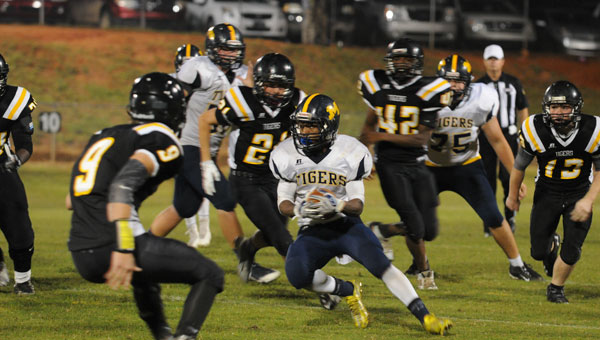 In a Class 1A, Region 2 showdown the Red Level Tigers (2-4) were throttled by conference rival McKenzie Tigers (4-3) Friday night by a score of 41-8. McKenzie was led by a punishing rush attack and Red Level was hampered by a slew of mistakes throughout the game.

McKenzie scored on their first four drives on the game with running back Robert Shufford scoring on three of the drives. Quarterback Daniel Gaston threw a 29-yard touchdown pass to receiver Seth Keeney on the other scoring drive in the first half. The Red Level offense never managed to get things on track, as each time they would begin moving the ball the drive would stall due to a penalty, or worse, a turnover. McKenzie led 28-0 at the end of the first half.

In the second half the Red Level defense managed to tighten up and shut McKenzie out in the third quarter despite losing defensive leader Ontaryo Nearor due to him being ejected for throwing a punch in the first half. That, however, would not hold up in the fourth quarter as Shufford added his fourth rushing touchdown of the game.

Red Level running back John Lee finally put his Tigers on the board following a 61-yard touchdown run. Lee also converted the two-point conversion to cut the lead down to 34-8.

Shufford answered right back, though, scoring on a 44-yard run to seal the victory for the McKenzie Tigers 41-8. Shufford would end the game running for 265 yards and five touchdowns. Red Level’s John Lee would rush for more than 100 yards once again this week, and for the fourth straight week scored on a touchdown run of more than 50 yards.

Red Level finished up a three-game home stretch, 1-2 in those games, and will hit the road for a two game road trip starting next week against region foe Pleasant Home as they look to bounce back in the Tigers’ hunt for a playoff spot.