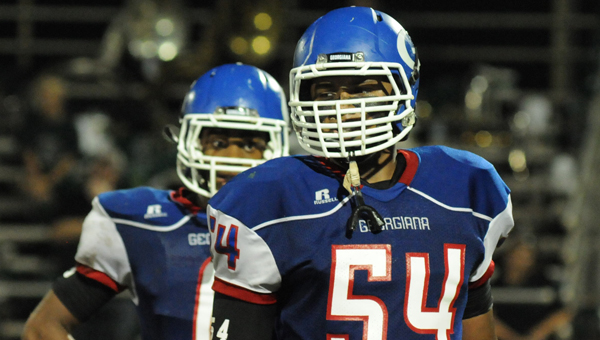 Georgiana will be without the services of Zeke Powell Friday night. The junior, who plays offense, defense and special teams, won’t return for at least five weeks due to a high ankle sprain. (Advocate Staff/Andy Brown)

On paper, the Georgiana Panthers’ upcoming faceoff with the Pleasant Home Eagles is a foregone conclusion.

The Eagles, still in search of their first win of the 2015 season, cough up nearly 46 points per game—a feat that the high-powered Panthers’ offense has achieved on more than one occasion this year.

But Ezell Powell, Georgiana’s head football coach, was quick to remind his Panthers that there is no such thing as a foregone conclusion in high school football.

“I’ve personally been in a situation like that when I was in Mississippi,” Powell said. “We played a team that had to forfeit ballgames, and they were a 1-9 team that got into the playoffs.  We were the No. 1 seed, and they beat us in the first round.

“So I remind them about never taking anybody lightly, no matter who they are or how many games they’ve won, because on any given night, if you’re not on like you should be, you can lose also.”

The Panthers lost a bit more than their first game last Thursday against the Greenville Tigers as quarterback Jacquez Payton went down early in the first half with a sprained shoulder.  His return will be a game-day decision.

Worse off is Zeke Powell, a constant presence on offense, defense and special teams, who won’t return for at least five weeks due to a high ankle sprain.

“His loss is hard on us, but at the same time there are other guys on the team that are ready to step into the role and do the best they can to fill his shoes for the time being,” Powell said.

“I think it hurt us in the kicking game because he snapped on punt, kicked off for us and also kicked on point-after-attempts. So we’re going to have to make some adjustments in that regard.”

Though the Eagles maintain a noticeable size advantage over the Panthers, Powell aims to use his players’ speed to attack early and often.  What Pleasant Home lacks in athleticism is more than compensated by pure grit, thanks to a physical ground game capable of sustaining long drives and eating up precious minutes from the clock.

Defensively, Powell said that the game will be won or lost on first and second downs.

“We can’t try to stand up with them and let them push us off the football because we’re not as big as they are.  So their size can really wear on us if we try to stand up and compete with them on their level.  We have to learn to stay low, use our quickness to our advantage and disrupt things in the backfield to keep them behind the sticks.”

The Panthers travel to Pleasant Home Friday night.  Kickoff is slated for 7 p.m.

The McKenzie Tigers look to fight off a midseason slump against the Red Level Tigers, but they’ll do so against... read more