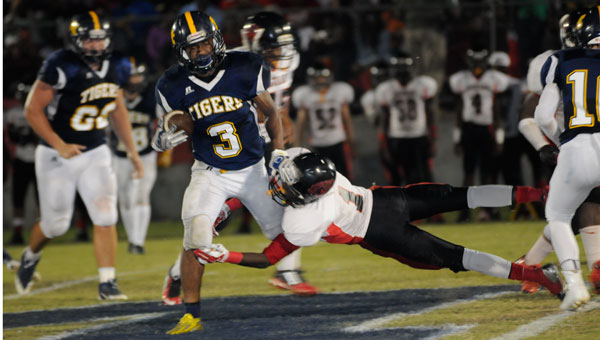 McKenzie running back Chris Shufford found it difficult to avoid a speedy Jaguars defense as Hillcrest Evergreen claimed a 43-12 win over the Tigers Friday.

The McKenzie Tigers got started on the wrong foot and never found the correct one as the visiting Hillcrest Evergreen Jaguars tamed the Tigers in a 43-12 win.

A 72-yard bomb to towering, 6-foot-3-inch Tyrell Riley gave the Jaguars a quick 16-0 lead on the heels of the Tigers’ disastrous start rife with fumbles and penalties.

The Tigers’ turnover woes continued on the following drive when running back Chris Shufford had the football stripped in a gang tackle, resulting in a Jaguar recovery and touchdown run to take a 23-0 lead with 3:32 remaining in the first quarter.

The lead swelled to 36-0 before Shufford mounted the Tigers’ first response on a kickoff return for a touchdown with 3:47 remaining in the half.

Costly mistakes proved difficult to overcome, and dictated the pace of the entire game.

“We weren’t able to recover the onside kick, and that just got the snowball rolling a little bit,” Norris said.

Norris said he saw some of the fire return to the Tigers’ defense on the Jaguars’ opening drive in the third quarter, after a stellar defensive series from McKenzie ended in a turnover on downs for Hillcrest Evergreen.

However, the Tigers’ offense struggled throughout the night to earn yardage either on the ground or in the air.

With two interceptions from quarterback William Brown—and a speedy Jaguars defense meeting Shufford on the edge at the line of scrimmage—the Tigers’ two most popular options were all but neutered.

“We’ll look at the tape and see what we’ve got to correct and see where we go from here, and just come back Monday ready to work.”

Norris called the matchup with the Class 3A Jaguars a measuring stick for the Tigers’ potential in the postseason.

Despite the loss, he’s confident that the Tigers’ can regain their shaky footing.

“You’ve just got to go back to work and get some questions answered and go from there.  Now there needs to be a little bit of a sense of urgency, but I haven’t pushed the panic button just yet.

“We played a good fast, physical Hillcrest team tonight, and that’s what I wanted; I wanted somebody that was going to challenge us halfway through the season so that we could get something out of it.”

The Tigers return to region play by hitting the road to face the Red Level Tigers Friday.