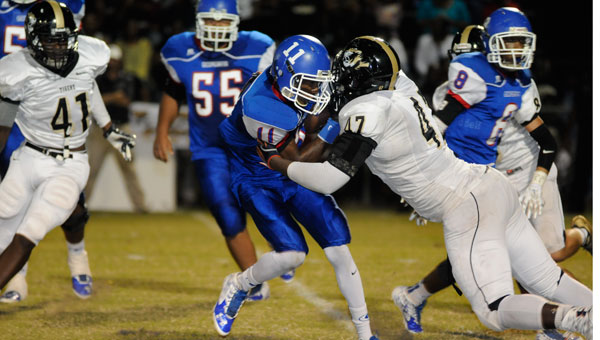 Greenville defensive end Marlon Davidson proved a constant threat in the Georgiana backfield as the Tigers claimed a 21-8 victory over the Panthers Thursday.

A stellar second-half performance from the Greenville Tigers’ defense ended a perfect season for the Georgiana Panthers as the Tigers claimed a 21-8 victory over their in-county rivals.

Marlon Davidson set the tempo early for the Tigers with an interception on an underthrown ball in the flats on the second play from scrimmage.

Unfortunately, the Tigers failed to capitalize on the excellent field position within the Panthers’ 30-yard line, giving the Panthers a second crack at the first strike.

The second outing proved far more profitable for Georgiana offense as receiver Geron Feagin came down with a one-handed grab, streaking down the sideline for a 50-yard gain.

The successful pass paved the way for running back Cameron Longmire as the stout runner relentlessly attacked the middle, eventually finding paydirt and the Panthers’ first score of the night.

Greenville defensive back Ja’Quaun Lewis made the first of his many touches at quarterback at the top of the second, connecting with Skilar Moorer on a perfectly-delivered touchdown pass to bring the Tigers only one point behind at 8-7.

And for nearly a quarter and a half, the score would remain there until a pivotal third and 23 for Greenville, in which quarterback Brandon Simmons launched a hail mary that was nearly intercepted and then reeled in by Moorer.

Greenville head football coach Josh McLendon said that the tipped pass may have very well been the defining turning point of the game.

“We got a fortunate bounce on the long ball to get us going, but they’ve got a heck of a team,” McLendon said. “I just can’t say enough about that group.  They’re well coached and they play extremely hard.

“I’ve been preaching to the boys all week that you’re not just going to walk in here and do what we want to do to these guys. And that’s the way it was.  I think we’re very fortunate to get out of here with a win, without a doubt.”

The touchdown siphoned the momentum from the Panthers’ sideline as injuries took away key players Jacquez Payton and Zeke Powell for the remainder of the game.

Their absence, coupled with a mounting number of substitution penalties, proved too difficult to recover from.

“We made some careless mistakes down the stretch that we can’t make in order to win a ball game, but I was proud of the effort of my guys,” said Ezell Powell, Georgiana’s head football coach.

“I thought they played their butts off all night long. We came in here with the mentality that it wasn’t a fluke, and that we weren’t 5-0 because of chance—we were 5-0 because we earned it.  And we came up a little bit short, but to play a Class 5A team the way we did, I can’t do anything but be proud of my guys and the effort they gave tonight.”

Powell added that though there were several hung heads in the postgame Panthers huddle, his players had nothing to be sad about.

“I just told the guys how proud of them I was, and how proud this community is,” Powell said.

“Even in this loss, they gained a lot of respect.  There are a lot of people that look at them now and know that this isn’t that Georgiana team that took losses for all of those years.  This is a different breed of Panthers.”

The Panthers and the Tigers both reenter region play Friday with contests against Pleasant Home and Alabama Christian respectively.

Georgiana, Greenville to square off Thursday

Georgiana will face arguably the largest obstacle on the path to a perfect season in the Greenville Tigers, the second... read more