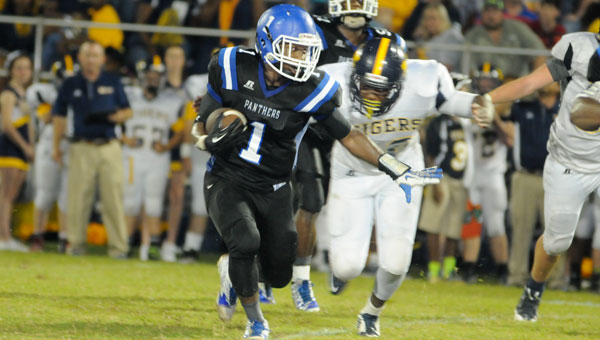 Cameron Longmire propelled the Panthers to victory with a powerful ground game against the rival McKenzie Tigers Friday night.

The Battle of Eight Mile was a near stalemate for two quarters, but several second-half  turnovers sank the McKenzie Tigers as Georgiana cruised to a 38-12 victory.

The win pushes the Panthers to a 5-0 start and the forefront of Class 1A Region 2.  But more importantly, the win provided a community with some long-awaited payback.

“It’s an awesome feeling, because this is one the community has been wanting for a long time,” Powell said.

“Defense did a great job, and special teams did a great job on kickoff every time of making sure they never really got loose.  So it was one of those team efforts that allowed us to get a big win for this community.”

But it was the Tigers who dictated the pace early after stopping a red-hot Georgiana offense cold in their tracks, even after a massive 40-yard run from Cameron Longmire.

Unfortunately for the Tigers, the Panthers’ defense proved even more aggressive on the following possession, blowing up an attempted punt to receive the ball on the Tigers’ own 26-yard line.

The short field was covered in no time thanks to Demarcus Rich after beating a defender one-on-one to pull down the Panthers’ first touchdown of the night.

The Tigers wasted no time in their response with a ground assault led by Jay Womack, tying the game at the top of the second quarter.

The back-and-forth continued on kickoff as Jacquez Payton streaked down the field untouched for a 79-yard touchdown.

Chris Shufford would answer the Tigers’ call to arms on their third attempt at paydirt, eating half of the drive in a single 45-yard run.

A late hit pushed the Tigers to the 4-yard line, which Shufford easily cleared on his next touch for McKenzie’s second score.

Cameron Longmire bulldozed through a sea of white jerseys on the ensuing drive for a quick Panthers touchdown just before the half, but the true nail in the coffin came in the third courtesy of a pick-six from linebacker Richard Boggan to put the Panthers up 32-12.

The interception flustered McKenzie quarterback William Brown, who otherwise proved stellar for the Tigers on a flurry of keepers up the middle for multiple first downs.

Unfortunately, two additional second-half interceptions all but closed the book on the Tigers’ offensive momentum.

“In the second half, we just had some bad plays at the wrong time,” Norris said.

“We had a couple of turnovers early in the second half, and they turned into points.  And you can’t do that against a quality team.

“We’re going to move on.  We’re going to get better.  We’re going to fall forward, and learn from what we did both good and bad.  It’s a marathon; it ain’t a sprint.  We don’t want one bad week to turn into two, because the next thing you know two turns into three.”

The Panthers will face a second in-county rival in the Greenville Tigers Thursday night, and Powell said that the non-region game is every bit as important as any other.

“Our goal is to stay undefeated; that’s our goal,” Powell said.

“We approach every ball game to win it.  If we can still a ball game against Greenville, it’ll be huge.  I don’t know if McKenzie or we have ever beaten the other two schools in the same year.  Being the champs of Butler County sounds pretty good to me, too.”

The Tigers will face Hillcrest Evergreen at home Friday for senior night.