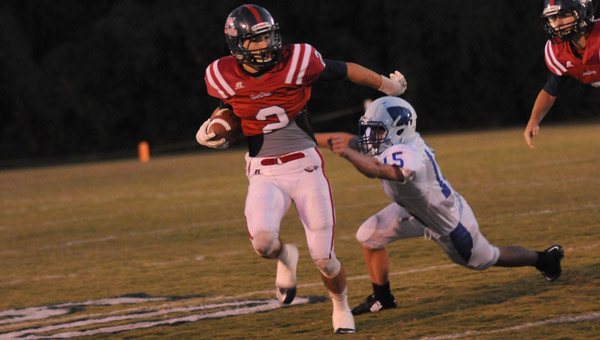 “We can build on this,” Fort Dale Academy head coach James “Speed” Sampley said. “Our first-team offense scored easily and our first-team defense played well. It’s a win and we’ll take it.”

Fort Dale wasted little time getting on the scoreboard.

It would be a sign of things to come.

With 8:01 to play in the first quarter, Taylor tossed a 75-yard touchdown pass to Vickery.

Less than three minutes later, the sophomore signal caller hit senior running back Maurlan Dickerson on a screen pass that the Fort Dale speedster turned into a 35-yard score.

Taylor’s final touchdown pass of the night came late in the second quarter when he threaded the ball past a defender to a diving Stephen Hartley.

Taylor finished the game 7-for-7 for 202 yards and four touchdowns.

Senior Jake Gillem was a perfect 5-for-5 on point after attempts.

Cody Parker tallied 15 stops to lead the Eagles’ defense, which also got into the scoring act when senior Colby Stone scooped up a fumble that was caused by a big hit from junior Zach Burt and rumbled 31 yards for the touchdown.

While Sampley was pleased to get the win, and to have the opportunity to play his backups for a significant number of snaps, the longtime coach said there’s plenty of room for improvement.

“Our younger guys have got to learn to play a little tougher,” he said. “We need to learn to finish games whether we have our first group on the field or our second group.”

Fort Dale will be back in action next Friday when it travels to Evergreen to take on Sparta Academy. Kickoff is set for 7 p.m.