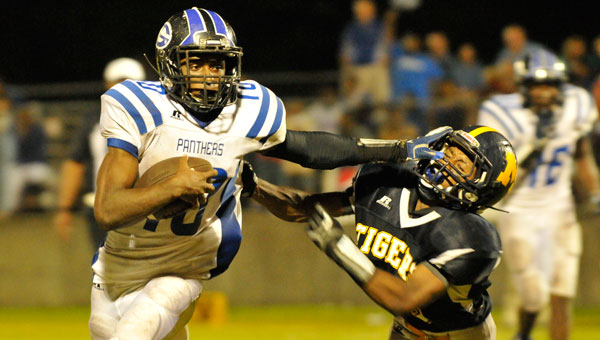 The so-called Battle of Eight Mile has been waged between The McKenzie Tigers and the Georgiana Panthers on 45 different occasions, but this year’s meeting stands out for one reason.

Not only is it a rivalry game between two close communities, but it’s also a battle between the two top teams in Region 2 of Class 1A.

The Panthers (4-0) and the Tigers (3-0) both sit at 2-0 in their region, meaning one team will leave Friday night’s battle with a crucial region loss.

Both Tony Norris and Ezell Powell, McKenzie and Georgiana’s respective head football coaches are well aware of the game’s significance.

“I really think the winner of this game will obviously be in the driver’s seat early in the region,” Norris said.

“I think it allows you to control your own destiny, but there’s still a lot of football to be played.”

“Whoever wins will be in the driver’s seat, but that’s the furthest thing from my mind,” Powell said.

“We understand that the implications of it are there, but that’s not our focus.  It’s on going out and winning the next ball game.”

And doing so will be difficult for both teams, as both offenses have proven difficult to slow down this season.

“They’re so good on offense that you’re just going to have to pick what you want to allow to happen,” Norris said.

“You’re going to want to take away the most dangerous weapon and see what happens there. Coach Powell has done a great job with them over there, and all you have to do is turn the film on and look for yourself.  It isn’t hard to see.”

“For us to slow them down, we have to be fundamentally sound on defense,” Powell said.

“We understand the damage that Chris Shufford and Condie Pugh both can cause if we let them get loose in the open field.  And William Brown will do a good job on the power read.

“But just knowing who we have to key on and limiting the explosive plays—and doing a good job of tackling in space—will allow us to stay in the ball game.”

Historically, the Panthers lead the Tigers 27-18 in the series, but McKenzie hasn’t tasted defeat at the Panthers hands in the past seven meetings.

But history is of little consequence in high school football, and Powell said that the key to snapping the streak begins at home.

“We have to make sure that we understand our assignments and how to execute them,” Powell said.

“Whoever can settle down first and not get caught up in the hype of it and ride that momentum one way or the other will be the one that turns out to eventually win the ball game.”

Norris wants his players to savor the moment, but ultimately remember that this is just one step on the long road to a state championship.

“I told my kids that this game right here is the whole reason you play high school football,” Norris said.

“You have a great opportunity to go against Georgiana, which is obviously a rivalry, and also for both schools to be undefeated. But the reason why it’s the most important game is because it’s the next one.

“Rivalry aside and region aside, you’ve still got to do what you’re coached to do.”

The Battle of Eight Mile will resume Friday night at Georgiana.  Kickoff is slated for 7 p.m.