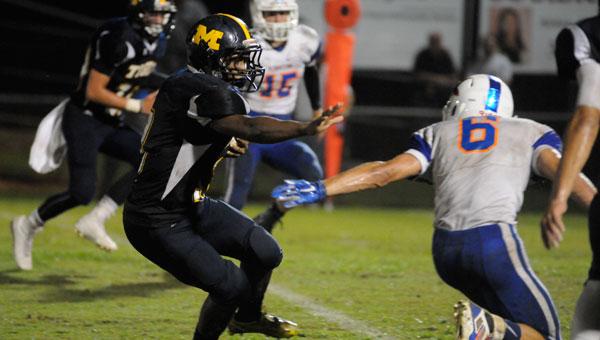 McKenzie running back Chris Shufford makes a Kinston defender miss in yet another impressive night on the ground.

For the second week, stellar defensive play controlled momentum in the second half as McKenzie coasted to a 34-6 win over the Kinston Bulldogs.

But it was a contest fraught with controversial penalties that kept the Tigers moving backwards as often as forward.

A relatively clean first drive put eight points on the board for McKenzie in just under three minutes, but the Bulldogs responded with a gutsy punt fake pass that resulted in a touchdown, nearly evening the odds at 8-6 with 5:38 remaining in the first.

It was the last time the Bulldogs would find pay dirt.

But Kinston would threaten on numerous occasions throughout the penalty and turnover-infested first half, but not before Seth Keeney scooped up a fumbled ball and took it to the house for a 60-yard touchdown.

But the Bulldogs weren’t the only ones who had difficulty holding on to the football on marshy terrain, as a costly cutback from McKenzie running back Chris Shufford—who had an otherwise stellar performance—put the Bulldogs at the Tigers’ 37 yard line with 1:50 to play in the half.

But a stock-still McKenzie defense refused to budge from their own one-yard line, causing a turnover on downs just six seconds before the half.

Tony Norris, McKenzie’s head football coach, said that the message at the half was a simple one after a sloppy first-half performance.

“I said ‘guys, we’ve just got to come out in the second half and do what we do.’ And they did,” Norris said.

“There’s no sense in me going in there and getting irate with them.  They understand what they’re supposed to do.  We just weren’t executing well, on offense especially. But they came out in the second half, understood the challenge that was ahead of them and kept working.

The Tigers’ true opponent in the second half were the numerous yellow flags thrown their way, resulting in abbreviated drives and second chances for Kinston.

Despite the frustrated sideline and home crowd, Norris urged his Tigers to keep their cool.

“When adversity hits, are we going to start coming together or pointing fingers at one another?” Norris said. “And they came together and did what they were supposed to do.”

Though an unsuccessful passing game resulted in very little, a switch to the ground game—led by alternating duo Chris Shufford and Jay Womack—kept a fatigued Bulldogs defense on their heels.

The pair combined for three touchdowns in quick succession that put the contest well out of the Bulldogs’ reach.

The Tigers brace for their third consecutive region game against the in-county rival Georgiana Friday.

Despite the annual buzz surrounding the face-off, Norris asked his team in the postgame huddle why next week’s game was the most important of the season.

Their response had nothing to do with their opponent.

“Because it’s the next game,” they said.

“I don’t care who it’s against,” Norris said.

“It’s a rivalry, and I understand that.  But at the end of the day, it’s about having fun with these kids.  I can tell you one thing; it’s going to be a good atmosphere.  Coach Powell has done a heck of a job with Georgiana, and he has done that since he’s been there.  It’s going to be fun to be a part of on next Friday night.”

The Tigers will travel just up the road to Harmon Field to face the Georgiana Panthers Friday at 7 p.m.

Cougars drop Eagles to 0-2 in region