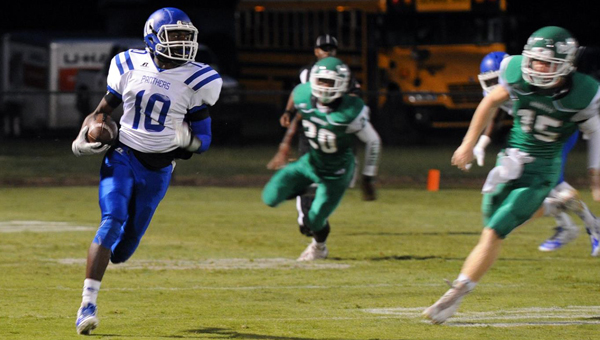 Georgiana quarterback Jacquez Payton outpaced the Bulldogs defense in a dominating first-half performance, earning the Panthers an early 23-0 lead in the second quarter. The Panthers would hold onto the lead to prevail 29-18. (Photo courtesy of Bryan Campbell)

The Georgiana Panthers snapped a streak older than themselves Friday night in knocking off the Class 1A powerhouse Brantley Bulldogs 29-18.

The win marks the first time since 1996 that the Panthers have prevailed over the Bulldogs.

But despite his elation, the Panthers victory was one he always believed in.

“We knew there were some things that we could do to get ourselves in position to make some explosive plays, and we were able to execute on some of those early.”

And explosive is exactly how the Panthers’ offense played, jumping out to an early 23-0 lead in the second quarter.

The ever-elusive Jacquez Payton led the ground game for the Panthers, but the quarterback had help in various forms—running back Cameron Longmire, backup quarterback JaMichael Stallworth and wide receivers JaMarcus Sims and Geron Feagin each played a pivotal role in the Panthers’ offensive prowess.

But it was defense that proved the nail in the coffin for the Bulldogs.

“Defense played a heck of a ball game,” Powell said.

“Coach Jacobs did a great job of game planning what he wanted to do against Brantley, and the kids went out and executed it.  They played hard.  There are a lot of things I could say, but the main thing is that they executed, played hard and did the little things that they were supposed to do to beat a team like Brantley.”

Linebackers DeQuan Crenshaw and Richard Boggan joined Longmire in dictating the flow of the game for the Panthers’ defense, as well as Demarcus Rich and Zeke Powell in the secondary and on the defensive line respectively.

There was no one factor that led to the Panthers victory—a fact that Powell takes a great amount of pride in.

However, with the Panthers sitting at 4-0 (2-0 in the region) and with one of the biggest region games of the year behind them, the danger now becomes complacency for the young Georgiana team.

But that was the first notion Powell and the Panthers’ coaching staff dispelled immediately after the game.

“I told them before they got off the field to enjoy the win tonight and tomorrow, but Sunday we’ll have to get ourselves refocused, understand that it’s over and re-focus on McKenzie,” Powell said.

“They don’t want us to win any more than Brantley did.  But in order to win, we’ve still got to go out and execute and see what happens.”

McKenzie running back Chris Shufford makes a Kinston defender miss in yet another impressive night on the ground. For the... read more