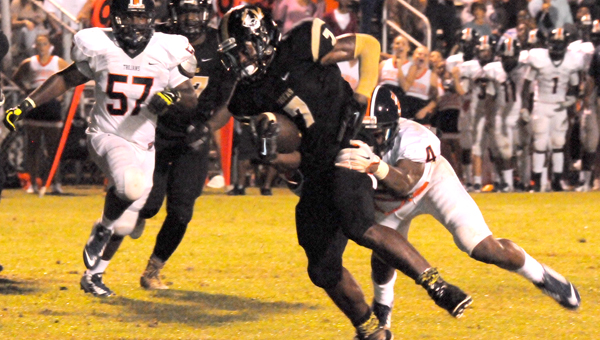 Dominate the second half.

“We challenged our guys at halftime,” McLendon said. “We wanted to come out, throw the first punch and put the game away.”

After yielding 10 unanswered points to end the first half, Greenville scored 14 points in the first 4:05 of the third quarter to take a 28-10 lead.

The first score was set up by a Mark Bradley interception. The senior defensive back returned the ball to the 30-yard line.

From there the Tigers chugged ahead on the strength of their rushing attack. Senior running back Dequarius Peterson did the honors when he broke free for a 14-yard touchdown run with 9:28 remaining in the quarter.

“He got stronger as the game went on,” McLendon said. “Offensively we didn’t really do much to help out in the first half. We had two big plays, but that was it. Our defense was on the field the entire first half. We knew we were going to have to run the ball in the second half to win the game. We were able to do that.”

The Tigers second score of the half came courtesy of the defense. With the Trojans (1-2, 0-1) driving, senior defensive back Ja’Quan Lewis jumped the route, snagged Charles Henderson quarterback Noah Lowery’s pass and raced 50 yards to the end zone.

Three minutes later, the Tigers’ offense found the end zone for the fourth time when Peterson barreled his way in from 14 yards out.

Greenville got first half scores from senior wide receiver Jonathan Powell, who caught a bubble screen from junior quarterback Brandon Simmons and sped 59 yards for a score.

Powell would later leave the game on a stretcher after being injured in the third quarter.

Senior running back Skilar Moorer gave the Tigers a 14-0 lead when he fought his way into the end zone from 2 yards out on fourth down.

Senior kicker Antonio Alvarez was a perfect 5-for-5 on point after attempts.

“This was a total team win,” McLendon said. “Defense, special teams and offense all did their job.”

Senior linebacker Timmy McCall recovered a fumble for the Tigers and senior defensive back Ja’Quan Smith intercepted a pass in the win.

“This was a big one,” McLendon said. “We’re going to enjoy it tonight and then we’re going back to work. We’ve still got some really good teams in our region on our schedule. We can’t afford to get ahead of ourselves, but this was a big win for our program.”

The Tigers will be back in action next Friday when they travel to face Alma Bryant High School. Kickoff is set for 7 p.m. in Irvington.