Kinston to give McKenzie toughest fight yet 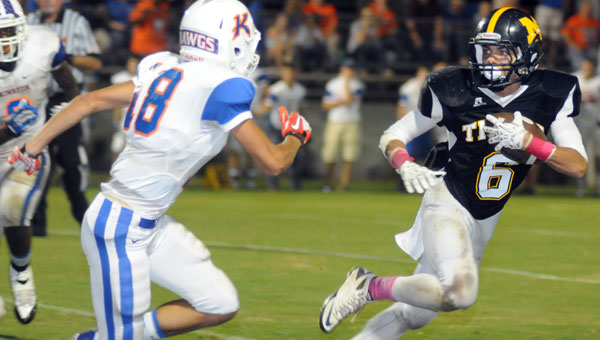 Star wide receiver Condie Pugh led the McKenzie Tigers to a 54-24 win over Kinston in 2014.

It was a holiday from school, but not from football as the McKenzie Tigers came in early Monday morning to prepare for their toughest opponent yet in the Kinston Bulldogs.

Tony Norris, head coach of the McKenzie Tigers, said that the Bulldogs remain a threat not despite their 0-2 record, but because of it.

The Bulldogs’ first two opponents came in the form of a tough Class 2A Samson team and Brantley, one of the constant kings of Class 1A.

“They’re going to be a well-coached team,” Norris said. “Coach (Jason) Wambles does a great job over there at Kinston, and he has for the past years that I’ve been involved in football.

The Tigers have had no difficulty meeting that challenge so far this season, particularly on offense.  McKenzie has racked up 133 points in just two games thus far, although Norris suggested that the Tigers would have a larger obstacle to hurdle over Friday, though he attributed the Tigers’ success on offense to a collective team effort.

“Right now, we’re executing pretty well because we understand that we have to block and make sure that everyone is doing their part,” Norris said.

“We’ve still got some things to work on and get better at—by no means are we anywhere close to where I want to be, to be honest, so we’re focused every day on some things that we see each game.”

One of Norris’ few criticisms of the Tigers from last Friday is a relative lack of intensity in the first half on defense.  Norris added that a lackadaisical defense this Friday could earn McKenzie their first region loss.

“We’re going to have to keep the intensity up all throughout the ball game,” Norris said.

“I just felt like there were a couple of possessions, especially on defense, where we did our own thing and we weren’t as physical as we needed to be to stop the run.  But that was something I just challenged them with at halftime—doing what you’re supposed to do, and they responded to it really well.”

Last year’s battle with the Bulldogs was neck-and-neck throughout the first half, but the Tigers’ offense wore the Kinston defense down in the second half and pulled away for a 54-24 victory.

Norris is expecting a similar challenge in this year’s Kinston team.

“They get after you.  They’re physical at the point of attack, and they play really good defense.

We’re going to have to be ready to play because this is a well-coached, disciplined team.”

McKenzie will host Kinston on Friday night at 7 p.m.