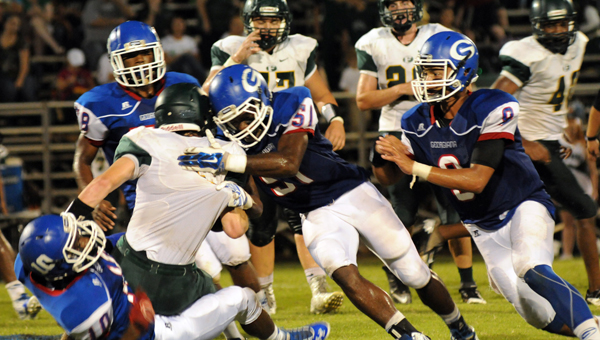 The Georgiana Panthers did their part to ensure that Friday night’s homecoming was a celebration.

“I was happy with the way the guys played,” said Georgiana head coach Ezell Powell. “They came out and played big.”

On the Wildcats’ first play of the game Elijah Patrick fumbled the ball on the Florala 30-yard line. Georgiana’s Cameron Longmire scooped up the loose ball and raced to the end zone to give the Panthers their first score of the night just 17 seconds into the contest.

On the ensuing possession, Florala quarterback Avery McNeil connected with Trey Burleson on a pass over the middle of the field. Burleson was hit hard and fumbled the ball. The Panthers recovered at the Florala 38-yard line.

One play later, Longmire was once again in the end zone, this time on a 38-yard scamper. Georgiana led 12-0.

After forcing a turnover on downs on the next possession, Georgiana upped its lead when Gerone Feagin scored on a 48-yard run on first down. Jacquez Payton added the two-point conversion and the Panthers led 20-0.

“Offensively we wanted to try and run the ball and take the pass when they presented it to us,” Powell said. “Our guys did a good job running the ball tonight. When we got the ball we scored so quickly, there wasn’t really anything negative I could say to them. When you score like that it’s hard to find anything negative.

“I’m sure when I look at the film I’ll find something,” Powell added with a grin.

On the Panthers third offensive possession they took a little more time to score. On second down quarterback JaMichael Stallworth connected with Feagin for a 45-yard touchdown. Zeke Powell booted the extra point attempt through the uprights to give Georgiana a 27-0 lead with 1:30 to play in the first quarter.

With 7:19 to play in the second quarter, Sir Jalen Scott scored on a 32-yard run. Payton hit Longmire in the end zone for the two-point conversion and a 35-0 Georgiana lead.

After another Florala fumble, this one of their 32-yard line, Payton zigged and zagged his way into the end zone from 32 yards out to give the Panthers a 41-0 lead with 6:35 remaining in the first half.

On the next possession, the Wildcats (0-2) had their best scoring opportunity of the night. They marched all the way to the Panthers’ 1-yard line before a bad snap backed them up to the 7-yard line. On fourth-and-goal from the 7-yard line, McNeil’s pass attempt fell incomplete giving the Panthers the ball back.

“I thought out defense played really well,” Powell said. “They forced some turnovers and did a good job of holding Florala out of the end zone.”

Longmire capped the first-half scoring with a 93-yard touchdown run on the first play after Florala’s turnover on downs. Georgiana led 49-0 at the intermission.

To begin the second half, Powell pulled his starting offense, but the Panthers still found their way into the end zone. With 9:01 to play in the third quarter, Stallworth hit Detevious Likley for a 55-yard touchdown. Kyle Powell added the two-point conversion for a 57-0 Panther lead.

The Panthers’ final score came with 10:46 to play in the final stanza when Jamarquis Pates snuck in from 9 yards out. Decorae Peterson added the two-point conversion.

“The guys did a great job all the way around tonight,” Powell said. “It’s always good to win on homecoming.”

The Panthers will be back in action next Friday when they travel to Brantley. Kickoff is set for 7 p.m.