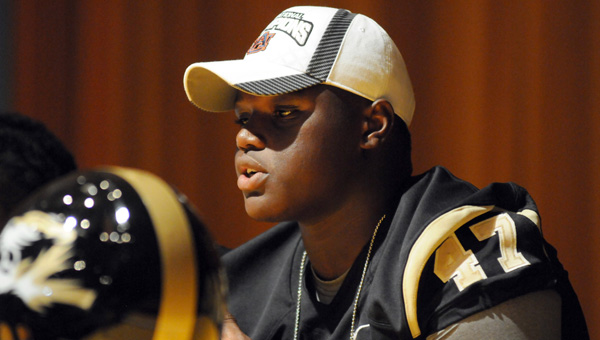 Greenville High School senior Marlon Davidson announced on Friday that he plans to play football at Auburn University. Davidson, who is set to graduate early and enroll in college in January, is one of the nation’s most prized recruits. (Advocate Staff/Andy Brown)

Football programs from around the country were tuned in to Greenville High School’s auditorium Friday afternoon, eagerly anticipating the decision of one of the nation’s top recruits.

Only Auburn fans walked away satisfied.

Five-star Greenville High School defensive end Marlon Davidson announced to a crowd of family, friends and coaches that he would be committing to Auburn University, setting off a thunderous “War Eagle” chant throughout the auditorium in the process.

One caveat of Davidson’s early Auburn commitment is that he still plans to take official visits to other schools, including Alabama, Georgia, LSU and Florida State.

Davison, who was joined by his brothers, Terrance and Kenneth, addressed the crowd and recruiters nationwide just prior to pulling an Auburn cap out of his bag.

“I want to thank all of my senior class, the football players and my family,” Davidson said. “I’d like to thank all of the coaches that actually came and met me to recruit me, and were kind enough to come to the school to ask me to play for them.

The decision was a late one for Davidson, who said that he wasn’t sure of his choice until June.

The 6-foot-4, 268-pound recruit named a number of qualities of Auburn’s campus — namely the tradition, family and love he felt during his visits — as a contributing factor.

Davidson watched his brother, Kenneth, play for the team and eventually become a member of the Tigers’ support staff.

His late mother’s passion for the school might have been the biggest factor of all.

“Every time I look at a picture of her, she has something Auburn on,” Davidson said.  “All of this is in remembrance of her.”

Davidson also expressed regret at some of his past immature decisions, calling himself a “knucklehead” while also expressing a desire to take his football career, and his education, more seriously with the help of his brother’s mentorship.

And though one of the biggest days of his life was made bittersweet with the absence of his mother, her lasting lessons continue to influence his life.

“She would never say ‘you did great,’ but she was always the person who told me ‘you could do more,’” Davidson said.

“Just like my brother did at Auburn, she would say ‘once you get there, finish.  Don’t leave too early and try to go and make a lot of money.  An education will last forever.’”