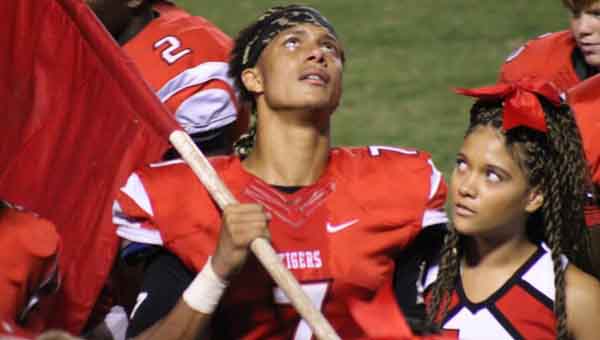 Luverne senior Austin Bryant had his eyes on the heavens above after the game.

He was thinking about DeShawn Lowery and all of the Tigers he had laid to rest over the years.

Lowery was killed in a motorcycle wreck over the summer. The former football player and diehard fan was 20 years old.

“I felt like I should do it for him and play for something more than just me,” Bryant said of the Brantley win. “He played basketball and football. But, even after he graduated, he would still come practice with us. He always scrimmaged us in basketball and asked about football.”

To honor Lowery, Bryant changed his number from 12 to Lowery’s 7. He also chose to include a photo of Lowery in his senior football portrait. They were ways to keep Lowery’s memory alive and to dedicate the season to him.

“He was a part of our family and always will be,” Bryant said.

The win was a personal feat for Bryant, too.

“All throughout the summer, I’ve heard I wouldn’t be able to do it at the quarterback role,” he said. “So, I had to prove otherwise.”

One of the first calls he received after the game was from his predecessor, Kenterius Womack. The Syracuse freshman spent three years as a Luverne quarterback and called to congratulate his teammate right after the game.

Bryant will continue his reign as quarterback Friday night as the Tigers travel to Goshen for their first regional game of the season. The game starts at 7 p.m.