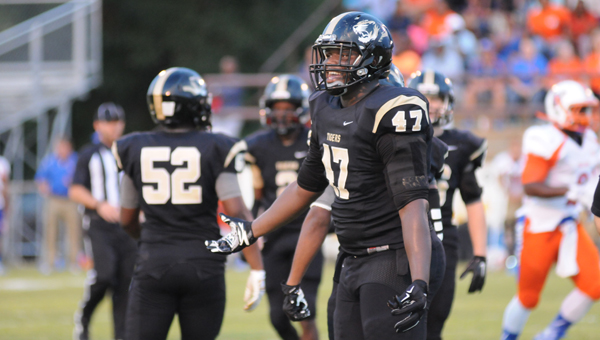 Greenville High School standout Marlon Davidson will announce his college choice on Friday in the GHS Auditorium, the senior tweeted on Monday.

Davidson, who is set to graduate early and enroll in college in January, is one of the nation’s most prized recruits.

Rivals.com has him rated as the No. 3 recruit in the country, as well as the top strongside defensive end and the top recruit in Alabama.

247Sports composite ranking, which takes into account rankings from recruiting services across the nation, has Davidson ranked as the nation’s 23rd best recruit, the third best strongside defensive end and the third best player in Alabama.

ESPN has Davidson listed as the No. 37 player on its ESPN 300, as well as the sixth best strongside defensive end in the nation and the second best player in Alabama.

247Sports lists Florida State, Oregon, South Alabama, UAB and USC among the school’s that have offered Davidson a scholarship.

The 6-foot-4, 268-pound defensive end has been tight-lipped about where he will continue his football career once his senior season at GHS is complete.

On Aug. 14, Davidson made it clear via Twitter that there’s no guarantee he’s going to stay in state.

“To everybody, Marlon Davidson (is) not guaranteed to go to Auburn or Alabama. OK. I’m free to anybody,” Davidson tweeted.

Most recruiting services have Davidson as a strong lean to Auburn given his brother’s connection to the school. Kenneth Carter played at Auburn and is now a member of the football team’s support staff.

Davidson will make his announcement at 11:30 a.m. Friday.