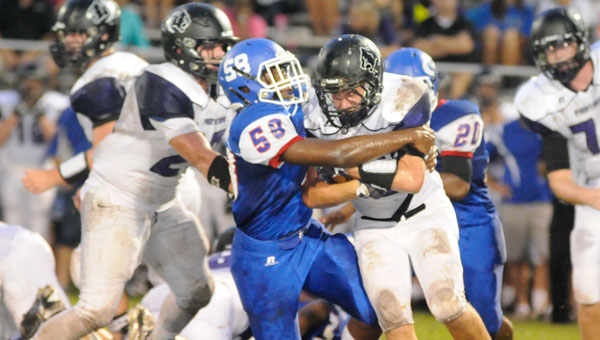 It was a dirty and oftentimes ugly job, but the Georgiana Panthers defended a swampy home turf from the invading Prattville Christian Academy Panthers in a 48-26 win.

Georgiana’s explosive offense gave the Panthers an early cushion, though the team was plagued by inexperience and a slew of penalties in the second half.

However, it was defense that came up big first for Georgiana as pressure to the quarterback forced an ill-advised shuffle pass, which was intercepted by linebacker Cameron Longmire for Georgiana’s first touchdown.

Quarterback Jacquez Payton kept the momentum swinging in Georgiana’s favor on an 80-yard keeper for the Panthers’ second score of the evening.

The third time was the charm for Prattville Christian’s next attempt at the end zone, thanks to a short field that began on Georgiana’s 34-yard line.

A stout Panthers’ defense, led by Richard Boggan, DaQuan Crenshaw and Longmire, forced a goal line stand at the 4-yard-line but, thanks to the first of many offsides penalties, Prattville Christian found paydirt on a 4-yard jaunt to make it 14-6.

Payton continued to prove himself as Georgiana’s get-out-of-jail-free card with a speedy sprint to the outside, and converted thanks to excellent downfield blocking from the Panthers’ offensive line.

Georgiana began the second half with a bang, thanks to another explosive 50-yard kickoff return from Payton that began the Panthers’ drive at Prattville Christian’s 40.

Longmire followed suit with a powerful run up the middle, shaking off numerous defenders to bring the ball to the 5-yard line.

A Payton jog-in later swelled the Panthers lead to 28-6.

Despite largely dominating time of possession in the third quarter, Prattville Christian only needed the final three minutes of the quarter to respond in the team’s lengthiest drive of the night to make it 34-12.

But a fourth-quarter start plagued with penalties and botched snaps allowed Prattville Christian to cut the contest to just two scores with eight minutes left in the game.

Georgiana head coach Ezell Powell said that it was a cocktail of exhaustion mixed with a lack of experience that allowed Georgiana to nearly give away their considerable lead.

“It’s fatigue, and then we’re having to throw young guys in there in situations where they’re not sure where to line up,” Powell said.

“And it costs us false starts.  And we had some miscommunication between the quarterback and center.”

But Payton came through once again on second down and 26, earning it all and then some on another 80-yard touchdown run.

Second-string quarterback JaMichael Stallworth would later burst up the middle on a lengthy quarterback keeper, earning his first touchdown of the night.

“I was really pleased with the way we ran the football,” Powell said.  Jacquez made some explosive plays for us running the ball.  Cam and Sir Jalen Scott did a great job of running the ball.

“And when JaMichael came in at quarterback, we started to move the ball pretty effectively and I just never took him out.  I was pleased with the poise he played with the whole ballgame to lead us up and down the field and help us take command of the offense.”

Powell said that the road ahead will only get steeper, though the first game allowed for a great opportunity for the Panthers to improve by watching themselves on film against a quality opponent.

“I think on both sides of the ball, there’s work to be done and improvements to be made,” Powell said.

“But tonight lets us know that we’re a pretty decent football team, but at the same time there is work that we have to do and things that we have to execute in order to get better as we go.  It’s not like our schedule gets any easier.”

The Panthers travel to Dothan Friday night to face Houston Academy.  Kickoff is set for 7 p.m.