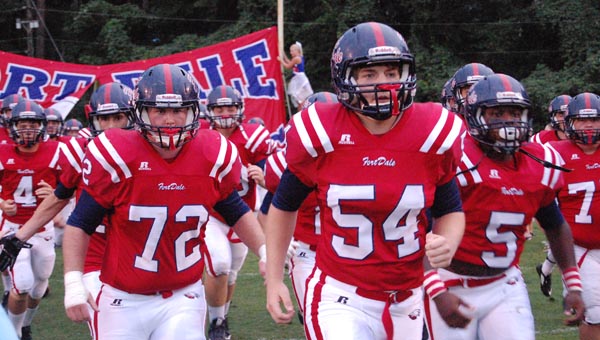 It was déjà vu all over again Friday night as Lee-Scott Academy dealt Fort Dale Academy a preseason loss.

Last season, the Warriors escaped with a 14-6 win.

Friday night the Warriors left little doubt to how the game was going to end, jumping out to a 41-0 halftime lead and cruising to a 48-0 win in the final preseason tune-up for both teams.

Fort Dale was playing without senior offensive linemen Sam Bowen and Reed Crosby, which was a big blow for the Eagles’ offense.

“We hope and expect our offensive line to really be the strength of our football team,” Fort Dale head coach James “Speed” Sampley said.

The Eagles, who finished last season with a 4-6 mark and missed the playoffs for the first time since 1999, will now turn their attention to Evangel Christian Academy in hopes of kicking off their 2015 campaign with a victory.

The Eagles own a 1-0 mark all-time against the Lions after scoring a 59-6 win in last season’s opener.

Kickoff for next Friday’s season opening contest is set for 7 p.m. in Montgomery.