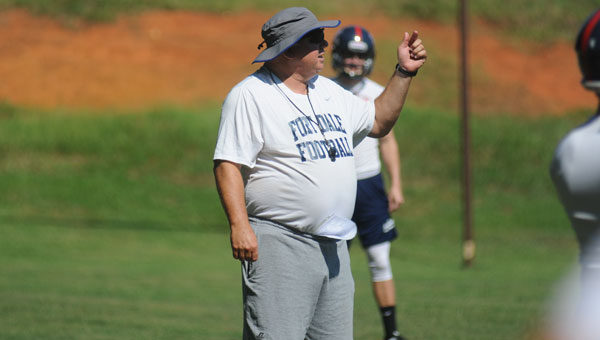 James “Speed” Sampley, who is entering his 17th year as head football coach of Fort Dale Academy, is one of 12 inductees to be honored as members of the Class of 2015 AISA Hall of Fame.

The Alabama Independent School Association (AISA) recently announced its 10th class of inductees for the AISA Hall of Fame, and a familiar face is among its ranks.

Fort Dale Academy’s James “Speed” Sampley is one of 12 members of the 2015 Hall of Fame class to be recognized for his significant contributions to Fort Dale and the association as a whole.

According to David Brantley, headmaster of Fort Dale Academy, those contributions are too numerous to track.

“We’re very proud of Coach Sampley, and we’re proud of the way he represents our school, and the love that he has for our students and this school,” Brantley said.  “He has meant much to so many people, and it’s great for us to be able to pay tribute to him in this way.

An outstanding coach demands outstanding results and, by and large, it’s exactly what Sampley has produced at Fort Dale Academy with a 119-66 win-loss record throughout his 17-year tenure.

He has produced a total of three trips to the state finals, including a championship in 2010.

Sampley also coached at Lowndes Academy, leading the Rebels to the finals twice and winning a championship in 1997.

But if one were to ask Sampley himself about his coaching successes, one would realize that he considers himself to be a very small part of the reason why.

“If you’ve done this as long as I have, you don’t get anywhere in this business without good people,” Sampley said.  “We’ve had good coaches working for us throughout the years, good administrators and good support from the teachers.

“And obviously, we’ve had good players, and our players have bought in to what we wanted to do over the years.  It’s an old statement, but the Xs and Os aren’t as important as the Jimmies and Joes.”

A promoter of AISA state events, Sampley has also served as a coach in the annual all-star game for 17 years, and he volunteers his time in other events organized by the AISA coaches association.

Despite his obligations to the association, it’s the local work that he considers the most fulfilling.

“The most rewarding my job throughout my job is to watch young people grow into good, hard working, responsible adults, and hopefully have made some kind of impact on their lives to help them get there,” Sampley said.

The AISA 2015 Hall of Fame banquet and induction ceremonies will be held at the Renaissance Hotel in Montgomery on Oct. 26 at 6:30 p.m.

Georgiana defensive coordinator Mickey Jacobs has adapted the Panthers’ defense into a 3-3 stack that focuses less on reads and... read more