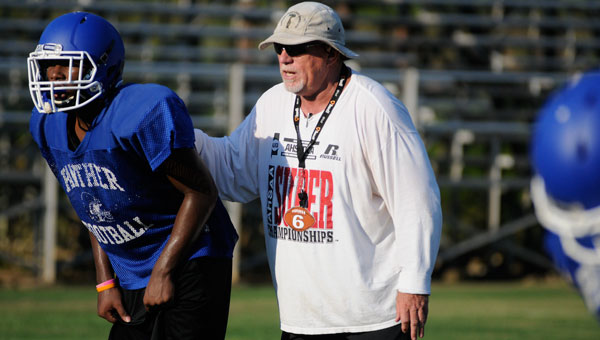 Georgiana defensive coordinator Mickey Jacobs has adapted the Panthers’ defense into a 3-3 stack that focuses less on reads and more on pressuring the quarterback.

The old adage says that defense wins championships, and it’s one lesson that Georgiana head football coach Ezell Powell has taken to heart in the offseason.

Powell has added another weapon to the Panthers’ arsenal in the form of defensive coordinator Mickey Jacobs.

Jacobs has collected 26 years of coaching experience and a state championship as Elba’s defensive coordinator, and both of those considerations made him an attractive addition to the Panthers’ staff.

But for Powell, that was only half of his appeal.

“When you talk to him, you knew he knew football,” Powell said.

“And according to what he runs and what he likes to do, I knew that he understood it.  He knew how to take it, put it against different offenses and do a good job at stopping people.

“So I just felt that he would be a guy that I could turn one side of the ball over to and be comfortable with him running it. And I could just focus on the other side of the ball a little bit better.”

Jacobs in turn said that it was the opportunity for success that drew him to Georgiana.

“There were several other possibilities, but this one was the one I thought was going in the most upward direction,” Jacobs said.  “I like to be a part of something positive.”

In short, the best defense is a strong attack.

“One thing I know about high school kids in general is that they are not as great of decision makers as kids who are in college or professional athletes,” Jacobs said.

“And if you put a little bit of pressure on them, that limits what time they have to make decisions.  And so that’s our thinking—by getting as much heat on those linemen and that quarterback as we can, that hurts his opportunity to make his adjustments.

“We always say that the best pass coverage is a sack, because the quarterback can’t throw the ball if he’s on his back.”

The Panthers will employ a 3-3-5 defense that constantly exerts pressure on the offense, and the change took some adjusting on behalf of the players.

Jacobs said that the same was true of not just his defensive scheme, but also his presence on the field.

“But as we’ve gotten to spend time together, I think they’ve started to buy into what I’m saying and they think it’s going to work for them, because they’ve seen some success already,” Jacobs said.

“And they’ve still got a lot to learn, but you could say that about any teenager.  I’m 56, and I’m still learning.”

There is one lesson in particular that the 2015 Panthers could stand to learn from their former selves.

“We inherited a pretty good team from a year ago, so I don’t want to complain about that at all, but they did have a little bit of trouble with giving up the long pass occasionally,” Jacobs said.

“We’ve tried to spend a lot of time focusing on how to deal with that, and if we can overcome that shortcoming, we’ll have a better chance of success.”

Tony Norris, first-year head coach of the McKenzie Tigers, outlined his expectations for the coming season of McKenzie football. The... read more