Freshmen not the only new faces on campus 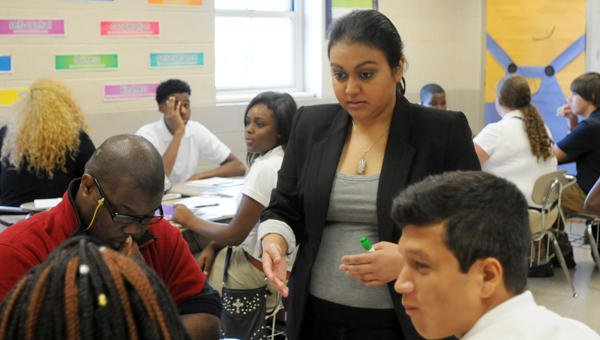 Nikki Patel and Joseph Schill are new to the Butler County School System and kicked off their adventure in education Thursday.

Patel is a Greenville native who has returned this year to teach A.P. and Pre-A.P. chemistry to 10th, 11th and 12th graders. Patel is not new to the world of teaching and began her teaching career in the summer of 2014 after graduating from Birmingham-Southern College. Her first teaching job was with Teach For America in the Delta region of Mississippi. After completing her training, she returned to Alabama and took a job in Huntsville as a biology, physical science and environmental science teacher.

After the closing of her school, Patel began searching for teaching jobs in other areas. She visited her hometown multiple times and fell back in love with the small town charm.  After a time of prayer and consideration, she believed that God was leading her back to Greenville.

“I said, why don’t I just go and apply and see if I get the job? And I liked that I was going to be super supported by the administrators and the staff. I felt really welcomed here,” said Patel.

Since starting with the Butler County School System, Patel has felt nothing but support from her supervisors and fellow faculty members.

“It’s overall a much more positive atmosphere to be working in. I feel like that will be good for me because positivity is contagious, just like negativity. I like being surrounded by positive people,” said Patel.

She hopes that the close-knit community of Greenville will help her become more connected with not just her students, but also their families.

“It helps to have the family on board with where you want the kids to go throughout the year,” she said.

Since many of Patel’s students are juniors and seniors preparing for college, she wants to incorporate and teach more of the career readiness skills she learned as a college student. She appreciates the fact that “everybody knows everybody” around town and believes this will aid her in finding speakers for career days.

Patel’s motto for her classes is “Be better than the day before.” With this motto, she hopes to help her students establish a purpose for not just this school year but for their futures.

“I want to be intentional with everything I do, whether it be shaking your hand or saying good job. I want it to mean something to them. That’s the classroom culture I want to create is that Miss Patel does care and she has a purpose behind what she does,” said Patel.

For some, it takes the process of going through college to know what career is best for them. For others like Schill, they find out in high school what their calling is. This year, Schill will be teaching 9th and 10th grade English. After participating in community service projects at school and getting to spend time with students, he realized that education was something he was interested in. He was given the opportunity to tutor students in the Birmingham area and further explored the opportunity of becoming an educator.

When searching for jobs over the summer, Schill sought out information from a few friends who had previously worked at GHS. The consensus was that this school and the environment was one of the best around.

“All of them told me that the faculty, the administration and the community is one of the most supportive that they’ve seen as educators,” he said. “That says a lot because these are people who can be honest, and one said it was the best teaching environment that she’d ever been in.”

This advice held true for Schill as he became acquainted with his fellow faculty members and with the English department; English faculty members also offered supplies and posters to Schill to decorate and prepare his classroom.

For Schill, the unity and camaraderie in the English department has helped him adjust and prepare for the upcoming school year. He is glad to be with this department and says that he couldn’t have asked for a better group to work with.