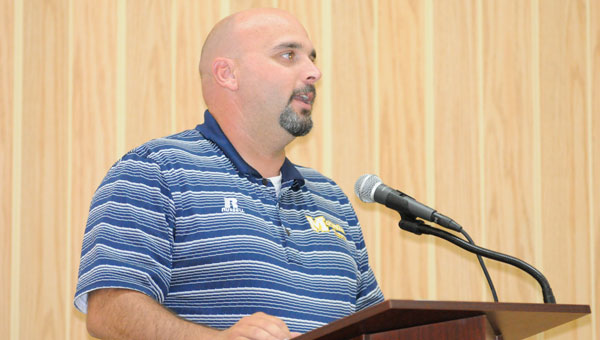 Tony Norris, first-year head coach of the McKenzie Tigers, outlined his expectations for the coming season of McKenzie football.

Georgiana School’s Ezell Powell, who is entering his third year as head coach, took ot the microphone first to outline his expectations for the coming season.

Joining him were senior captains Jacquez Payton and Richard Boggan, who would each serve as leadership and guidance for a young Panthers squad.

The Panthers lost 10 seniors in 2014, but the team looks to compensate for experience with hard work.

“For us this year, we’re trying to get our young guys out there and play a little bit above their age.  They’re just going to have to get out there, buckle up, compete and play hard.”

Frankly, there weren’t many.

McLendon brought seniors Joe Maxwell, a defensive end, and Danny Todd, center, and called both players a source of “leadership and strength” and like “extra coaches on the field.”

There will be a number of new coaches on the Tigers’ sidelines this fall, including receivers coach Ronnie Cox of Gulf Shores High School and former Greenville High School alumnus Marcus Mickles.

“Marlon brought a lot of attention this May, which is well deserved,” McLendon said.

“But we’ve got a lot of other guys on the team that are well deserving of attention, too.  We’re proud of what they do, and hope they continue to work hard.”

The Eagles will be running a similar spread offense to last year’s squad, as well as a 4-3 defense.

Josh Ritter of Dothan High School will start his first year at Fort Dale this season as a defensive lineman coach.

First year McKenzie head coach Tony Norris was last but not least, and he remarked on how the great McKenzie support system has eased his transition into the head coach position.

McKenzie will dress out 28 players this season.  Despite losing six important seniors in 2014, Norris added that the Tigers have a strong nucleus returning to the field for the coming fall.

“I have a lot of great people around me, including the coaching staff, administrators and a good group of kids,” Norris said.

“My senior leaders really stepped up to the plate this summer.”

The Alabama High School Athletic Association (AHSAA) recognized McKenzie School as one of a handful of Class 1A schools to... read more