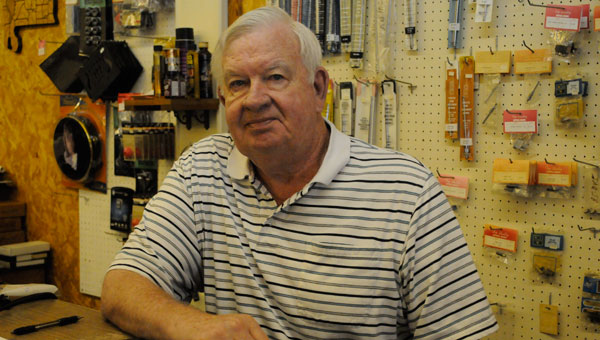 Another season of Greenville rec league baseball and softball will come and go in 2016, but it will do so without the presence of perhaps its biggest fan.

Butch Johnson has umpired for the Camellia City’s rec league for the past two decades, and coached 12 years prior to that, but he’s hanging up his signature blue umpire gear for good.

“I decided to hang it up because of physical problems,” Johnson said.

“I lost a lung last year and it got to the point where I just couldn’t breathe very well, especially in hot weather.  In the last few years, I’ve had knee problems and I couldn’t move how I should be able to, so I decided to give it up.”

Johnson’s 30 years’ worth of memories behind home plate were filled with good and bad times, but the one common thread among them were that they were all difficult to leave behind.

“You get irate parents and irate grandparents,” Johnson said. “That’s pretty much the hardest part of it, when you have people complaining one way or the other.

“But you have people that say you’re doing a good job, though they’re a lot fewer than the ones who want to complain.”

Johnson recalled old memories with fondness and warm laughter regardless of the subject matter.

He attributed that mostly to the children he met over the years.

“You see them come from 6 years old up to adulthood, and they still think well of you,” Johnson said.  “I enjoyed that aspect of it.”

He added that it was a blessing to be a part of something for so long that kids were able to grow up admiring him, and then have their kids to do the same.

“It’s different—it makes you think about how old you’ve gotten to be,” Johnson joked.

Despite the physical wear and tear that umpiring inflicted on him, Johnson argued that it was just as mentally taxing as it was physically.

“You always want to get the right calls.  A lot of people don’t think you do, but you do,” Johnson added. “And you’re going to miss some—you know it as well as anyone does.  But there’s nothing you can do about it.”

Johnson strove for impartiality throughout his umpiring career—arguably, too much, at times.

“Sometimes, believe this or not, I’ll leave the field and not know who won, due to the fact that I don’t pay a whole lot of attention to the scoreboard,” he said. “It doesn’t matter for my job who won or who lost.”

Though there are many things Johnson will miss (the heat will not be one of them), he’s looking forward to enjoying the game from the other side of the fence.

Hopefully, he’ll have a better view of the scoreboard.