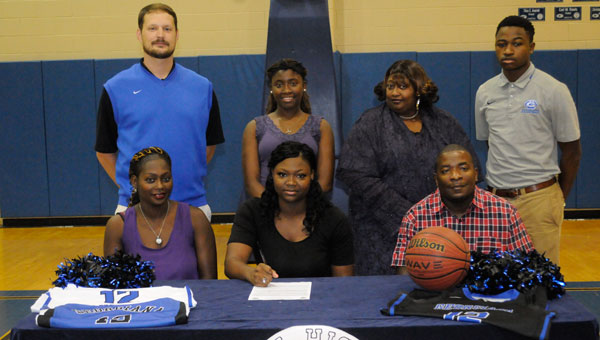 Despite some initial apprehension about moving to a new place that is fairly far from home, Johnson’s first reaction to receiving the scholarship was to throw caution to the wind.

“It was very exciting,” Johnson said.  “I was kind of scared to say yes at first, but I thought ‘why not try something new?’”

But Johnson will have some company in Mobile as her former teammate, Tyanna Perkins, signed to the same school several months prior.

“I didn’t want (Tyanna) to go by herself,” Johnson added.  “But since we got the same offer, I thought why not go together and get housing together?”

Johnson’s signing to Bishop State closes a landmark year for Georgiana School, as she marks the third member of the school’s basketball program to receive a scholarship offer, and the fourth student overall, including Matt Sheffield, who signed with Faulkner University’s baseball program.

“This is the first year where we’ve had three in one year, which is especially huge for a  Class 1A school,” Norris said.

“But it says a lot about these kids.  They’re committed, they want to continue their education, and also they put the time in and play hard.  They’re being rewarded.”

Norris added that a coach from Bishop State contacted him in search of a player who could handle the post, and Johnson was the first to come to mind.

“I told them about Zandreca,” Norris said. “She went down there about two or three weeks ago, they liked her and I was just excited that they were going to give her a full scholarship.

“And I think one thing that helped with that was Tyanna being down there, and it makes that transition easier for her.  And maybe it’ll help them to push each other to do well.”

Johnson said that a helpful administration and coaching staff also eased her transition into college life.  While she’ll be mainly focused on her general studies during her time at the college, she’s already looking ahead to a career in either cosmetology or nursing, depending on her ability to juggle her studies and basketball.

Either way, she already has at least one eager fan in the stands when the season begins in October.

“I’ll definitely be making a couple of trips to Mobile next year, and especially when they play Enterprise so I can see them and (Georgiana graduate) Jeremy Sims too,” Norris said.

“It’s a great year for these kids, and that’s what it’s all about.”

McKenzie in the planning stages of Night of Champions event

Terrance Clemons, starting quarterback and captain of the 2014 McKenzie Tigers team, may serve as one of four captains in... read more