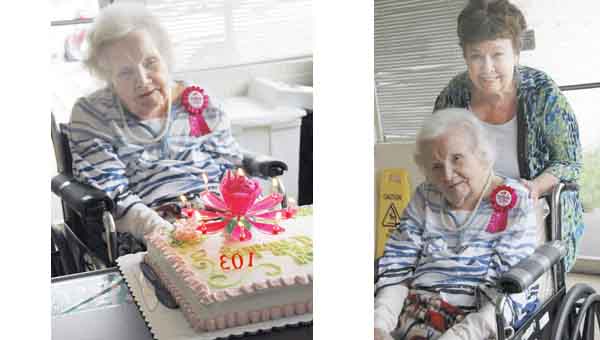 JAINE TREADWELL | BNI NEWS SERVICES
Velma Folmar Hightower, a Goshen native, celebrated her 103rd birthday Wednesday. Her daughter, Charlotte Goeters of Houston, Texas., other family members and friends hosted a party in her honor at the nursing home in Luverne.

She was a bit amused by the birthday candle, which appeared to be a rose bud but, when lit opened with sparkles, music and revolving candles.

“Some candle,” she said, with a smile.

She was more than pleased with a certificate of recognition from Governor Robert Bentley that congratulated her on another milestone birthday.

“Miss Velma,” as she if affectionately called, is a native of Goshen and a distinguished alumnus of Goshen High School.

She was valedictorian of the Goshen High School Class of 1930, which was the school’s first accredited class.

She was the second of the five children of Roy and Mary Folmar. She married Robert Louis Hightower, who was “quite a catch.”

The couple met when she worked the switchboard at the telephone company in Troy and he was a lineman.

Not long after they married, the Hightowers moved to Birmingham where they opened a hardware store. Together, they made a success of the business before a chain store opened just down the street.

The Hightowers moved back to the Goshen area. In a short time, Louis Hightower’s health began to fail.

Charlotte Goeters, who came from Houston, Texas to celebrate her mom’s birthday, said her mother lovingly cared for her dad for 15 years.

The Hightowers were in the process of moving to Troy when he died. She continued the move and enjoyed being in Troy for several years.

“Mother has always been very independent,” Goeters said. “She took charge of things in her own way. She loved the independence of having a car but she knew when it was time to hand over the keys and she did so on her own. She also knew when it was time for her to come to the nursing home. She has kept her wonderful sense of humor and she still loves pretty clothes so we always know what to give her.”

“Miss Velma” seemed to take her 103rd birthday in stride. She didn’t have a lot to say about it but smiled and thanked her well-wishers and laughed at her own wit when questioned about age.

She didn’t have secrets to share about living a long life, “just enjoy what you can.”