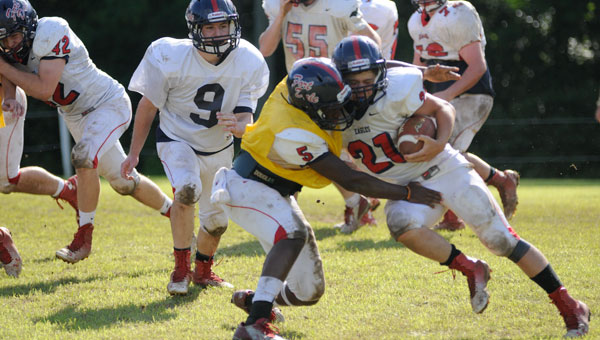 Maurlan Dickerson, left, and Andrew Salter are frontrunners for the running back position as the Fort Dale Academy Eagles prepare for the upcoming fall season with the start of fall practice on Thursday morning.

Despite the thermometer readings, summer is at an end for the Fort Dale Academy Eagles.

The team will enter fall camp bright an early on Thursday for its first official practice of the season with a 6 a.m. workout session and a 7 a.m. practice.

“We’ll be in shorts and helmets Thursday, Friday, Monday and Tuesday, and we’ll be in shoulder pads next Wednesday,” said James “Speed” Sampley, head football coach of the Fort Dale Academy Eagles.

Though the team has spent the past two months on the field, Sampley said that he’s more excited to see how the team has been affected by the work spent off of it.

“We made steady progress in the weight room, which is the biggest goal we had,” Sampley said.  “And we’re looking forward to seeing how that transitions onto the football field as soon as possible.”

But thanks to a number of changes to Alabama Independent Schools Association (AISA) contact rules and regulations, the Eagles will have to wait a few more days before putting that physicality to the test.

“You have to be in shorts for two days, on the third day you can go in shorts and shoulder pads for a total of 90 minutes,” Sampley added.

“On the fourth day, it’s a total of 120 minutes, and you can’t have any contact until the fifth day.  On the fifth day, you have 90 minutes of contact.”

Though summer camp blew by for the Eagles and Sampley himself, he added that the upcoming season isn’t a culmination of the past two months’ work, but the entire year.

“This is a process that began after last football season, and not something that just started in June.  We have gotten considerably stronger since last season, and we feel pretty good about that.”

The team has grown in some other ways, despite being stunted by an injury to the Eagles’ starting sophomore quarterback, Luke Taylor.

“Our starting quarterback had a hurt arm all summer long, and one of our goals was to work on the passing game, so we probably didn’t make as much progress in that as we’d wanted to,” Sampley said.

“But we worked on defense a good little bit, as far as trying to put in a defensive front and secondary coverages, and hopefully we’ve made some progress in that along the way.”

Fort Dale also has a menagerie of weapons in the ground game, though the dust hasn’t settled in the decision to choose a dedicated starter.

“If we had to play tomorrow, Maurlan Dickerson, Andrew Salter and Clay Mansmann will all share a spot as the No. 1 running back,” Sampley said. “They’re all starting on defense, so we’ll probably go with whoever’s got the hot hand on any given night.”

Despite some unfortunate injuries early on, Sampley is hopeful for a successful 2015 season if his team can remain healthy throughout the year.

“Luke Taylor is throwing now.  He has been released to throw, but we’re not throwing any routes with him—he’s just doing the long toss stuff,” Sampley said. “We’re not going to throw until practice starts.  There’s no sense in trying to do something here at the end.

When Pilgrim Rest Baptist Church pastor Robert White considered how to get the community’s youth involved, he thought back to... read more