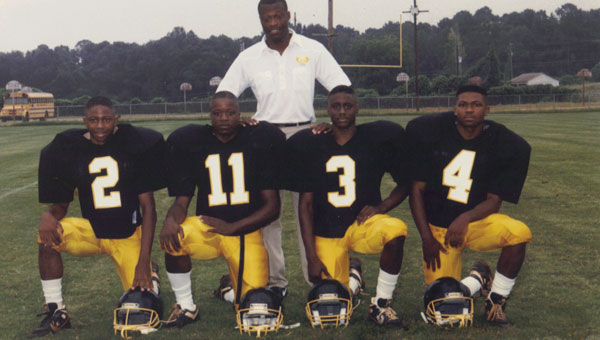 A pillar of the Pike County and Butler County communities is hanging up his coaching hat for good.

Sly “Malt” Atkins made his name in the Camellia City as a former captain for the 1984 Greenville Tigers’ football team, winner of the most valuable defensive back award and, briefly, as a coach.

But his largest and most lasting contribution is to the Trojans of Charles Henderson High School, where he served as a coach for 12 years in a variety of defensive purposes.

Atkins’ defensive prowess is the first item on his calling card, recording approximately 350 interceptions as a defensive back coach throughout his career.

Though he spent the vast majority of his career trying to keep players out of the end zone, he spent even more trying to send his own players somewhere else.

“The main thing for me is I try to get the guys to understand the importance of graduating from college,” Atkins said.

“I sent players to nearly every school in the state, and I have a wall in my house full of photos of students who graduated from college, and some went into the armed forces.”

One such player was Charles Henderson graduate and Auburn University safety Zac Etheridge, who recorded nearly six tackles per game with the Tigers during his senior year before suffering from a season-ending neck injury against Ole Miss in 2009.

“From the first day I met him, he’s been like a father to me,” Etheridge said.

“He taught me how to become an overachiever, and he’s the person I can give a lot of credit to in terms of receiving a scholarship.”

Etheridge added that Atkins’ signature discipline on and off the field made for many memorable moments, but none more so than his college graduation.

“Yeah, you want your high school coaches to come back, and not all of them are able to make it,” Etheridge said.

“But for him to take the time out of his schedule and see me bounce back from a terrifying injury and watch me walk across that stage, that stands out the most to me.”

Though Atkins’ career is peppered with a number of success stories from former players, it’s not entirely without tragedy, most notably regarding the passing of Demario Harris, a 17-year-old cornerback at Charles Henderson who suffered a ruptured brain aneurysm on Sept. 26, 2014.

“He weighed probably 170 pounds soaking wet, but he was good,” Atkins said.  “Academics… he was top of the line.  He’d already passed the ACT.  He had offers.  But pound for pound, he was good.  Boy, he was good.”

Ultimately, it was Bear Bryant who served as Atkins’ greatest inspirations.

The lessons he imparted where those that Atkins in turn applied to the game of football, as well as life.

“It’s like I always told my guys,” Atkins said.

“It’s not the will to win that matters.  Everyone has that.  It’s the will to prepare to win.”

The GHS Baseball Diamond Club will transform the GPRD parking lot into a bazaar on Saturday, July 25, to raise... read more