Panthers take gold in 7-on-7 tournament 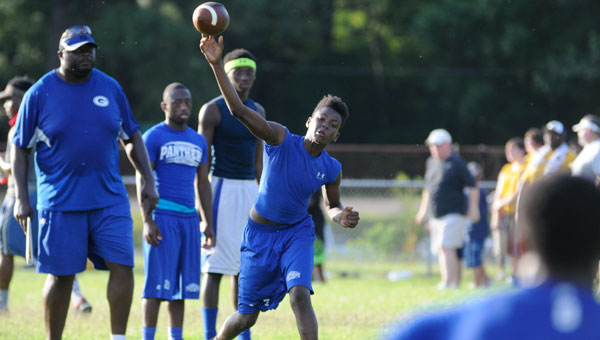 Second-string quarterback JaMichael Stallworth will enter his sophomore year with an extra helping of experience under his belt, thanks to a series of 7-on-7 competitions that the Georgiana Panthers have sought out during the summer.

The summer season of 7-on-7 football is over for the Georgiana Panthers, but not before the team claimed a first-place trophy from Wilcox Central High School.

The team traveled to Camden, Ala., to square off with Wilcox Central, Selma Southside, Monroe County and Marengo in a round-robin tournament, and finished with a  5-1 record on the evening.

Ezell Powell, head coach of the Panthers, said that he was pleased with the day’s events—pleased not only for the win, but also for their perseverance.

“We hit a point where heat was a factor, but we fought through it for the win,” Powell said.

“Overall, I was very pleased with our execution.”

The 2015 Panthers team is projected to be a bit larger than last year’s squad of roughly three dozen, but it will also consist of far more lowerclassmen than before.

Fortunately, Powell has the utmost faith in his youngest players.

“Any time you can get them in adverse situations, and have them find success it in, it will help them have confidence and believe in themselves going into the fall season,” Powell said.

“Both of them looked good all day long, and they started to understand the coverage as the day went on,” Powell said regarding his two quarterbacks.

A number of receivers answered the call when their numbers were dialed, including slot receiver Geron Feagin, who makes his return to the Panthers as a senior following an absence from the sport.

Equally impressive in the air were freshman Chris Mixon and sophomore Jamarcus Sims, who helped round out an already talented staff of receivers.

Powell said that the team’s defensive domination was a collective effort.  The team is still adapting to the new defensive scheme created by new defensive coordinator Mickey Jacobs, but a number of leaders—including Jacquez Payton, Cameron Longmire and Richard Boggan—have risen to the challenge.

“Cameron and Richard have been our anchors during the spring and summer seasons,” Powell said.

“They know their role, and they keep us lined up on the field.”

Powell said that the biggest takeaway from the tournament experience wasn’t the gold trophy, but the gained confidence in his younger players.

“The young guys we’re playing make up a large part of the team, but I believe we’ll be just as effective, if not a little bit more so, than last year,” Powell said.

“It’s just important that they know that they not try to be the group from last year, but become their own team.”

It’s almost that time of the year.  Football is in the air , fall is on the way and the... read more