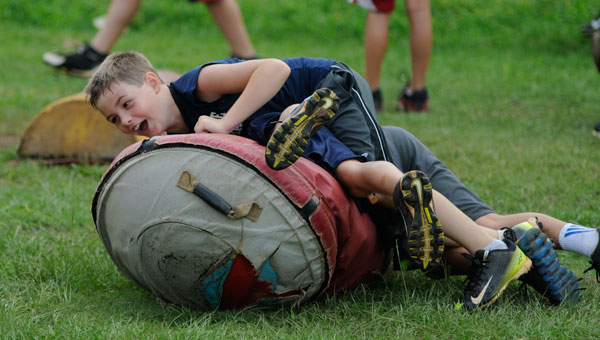 Screams and cheers echoed throughout Fort Dale Academy’s football stadium Tuesday morning, but the field itself was empty.  Instead, the action was on the practice field as FDA held its annual youth football camp for boys in grades 1-6.

Clint Lowery helmed this year’s camp, and was given the task of balancing fun and fundamentals to create a memorable weeklong experience for Fort Dale’s youth.

“We try to do the basic fundamentals of football, and add a little competition to it with some games to it that focus on them learning those fundamentals,” Lowery said.

“This week, we’ve been learning the proper mechanics of throwing and catching.  We did some tackling drills on some dummies, and we’re learning how to run and get in the proper stance.”

Tackling drills have been the highlight of the week thus far for the young campers, but Thursday is set to surpass it with slip-and-slide activities following the daily competition.

But the camp has proven entertaining for more than just the campers.

A number of varsity players are helping with the camp, including Maurlan Dickerson, Stephen Hartley, Colby Stone, Reed Crosby and Kenny Harden.

“We’ve got some kids that play varsity football out here, and they’re being mentors to the younger kids,” Lowery added.

“And then the younger kids get to watch them on Friday night, and if they get their name called out they can say ‘oh yeah, he taught me on youth camp.’ We’re trying to build a family-oriented program.

“And they already look to the older guys, so when they’re out here with them it adds a whole different level to it.”

Dickerson said that becoming a part of the campers’ development as football players has been the most rewarding.

“We’re just helping them learn the fundamentals of football—how to throw, how to take a handoff, and different things that are going to prepare them for their peewee and termite seasons and throughout their careers as football players,” Dickerson said.

Hartley said that getting to know the young campers provided for some unexpected laughs.

“It feels awesome, because these little kids look up to you and you get to hang around them and talk to them all day and teach them about football,” Hartley said.

“The part I’ve enjoyed the most is just seeing them smile and be happy. They make you laugh—some stuff they say, you’re not ready for it.  It’s always fun to listen to what they have to say.”