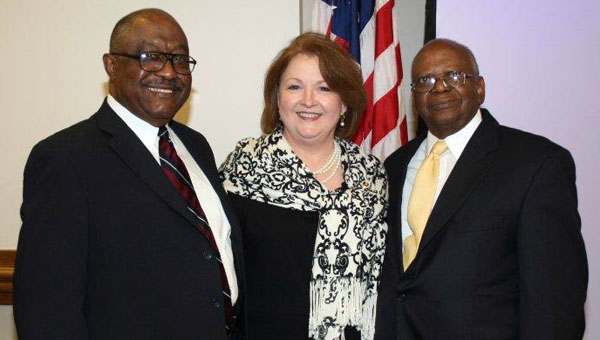 Lewis, who was most recently elected to serve on the council in 2012, represented District 4 for more than three decades. He was first elected in 1984, and according to city officials is the longest serving council member in the city’s history.

Greenville Mayor Dexter McLendon, who served on the council with Lewis since 1988, said it was a spirit of humility that made Lewis an exceptional councilman.

“He was a man of great character,” McLendon said. “He wasn’t somebody to stand up and make a lot of noise and draw attention to himself, but when he said something, everyone listened. He was a man of few words, but when he spoke it meant something. He was someone who just wanted to serve his community.”

During Lewis’ tenure on the council, Greenville was able to attract a number of businesses to the area, including Hwashin America, Hyundai Steel (Hysco America), CorStone Industries, Ozark Materials and Super Walmart. Lewis also had a hand in bringing The Edge, a state-of-the-art, eight-screen movie theater, to Greenville.

“James was instrumental in our economic development plan,” McLendon said. “He knew how important jobs are to a community and he was very involved in bringing jobs to our area.”

Lewis also worked to secure grants that helped improve housing in District 4, spearheaded an effort to have more than 500 feet of ditch filled in District 4, and helped get Dunbar Recreation Center air conditioning.

Lewis served as the council liaison  for the city’s Public Safety Division during his time in office. Greenville Police Chief Lonzo Ingram said Lewis was an asset to the city.

“He was a good man,” Ingram said. “He always tried to do what was right, even when it wasn’t always popular. We’re going to miss him.”

Lewis also served on the Water Works and Sewer Board and the EMS Advisory Committee.

City Clerk Sue Arnold said she was honored to work with Lewis and to call him a friend.

“James Lewis was without a doubt one of the kindest souls I’ve ever had the honor of knowing,” she said. “He was genuine, a godly visionary and devoted American and Greenvillian. I’ve enjoyed working with Mr. James, but he was more than a councilman to me. He was my friend, and I will miss my friend.”

McLendon said he and Mayor Pro Tem Jeddo Bell will make a recommendation to the council to fill the District 4 seat.

“We’ll do that at some point in the near future to make sure that District 4 is represented, but I honestly don’t know that anybody will ever be able to fill James’ shoes,” McLendon said. “He was special. He had a lot of knowledge, and he loved the City of Greenville. You can’t just replace someone like that.”

Funeral arrangements have not yet been announced.