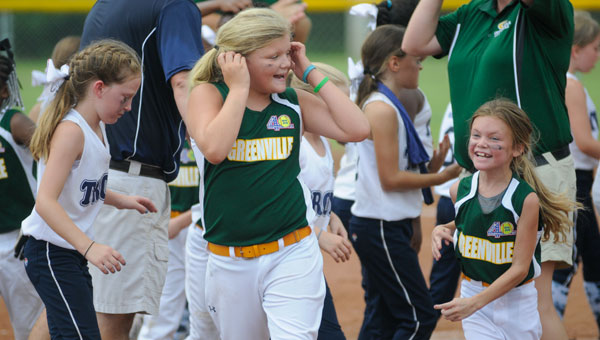 The Greenville Dixie Darlings celebrated a comeback victory over Troy after a late rally earned the team five runs in the final inning of play.

Though the Greenville Dixie Darlings lost two of their first three games and were eliminated from the Greenville-hosted sub-district tournament, they gave audiences quite a show beforehand in a miraculous fifth-inning comeback victory over Troy.

Greenville held onto a narrow 2-1 lead for the majority of the game, until Troy exploded in the bottom of the fourth with a double to centerfield, earning two runs and the first lead of the afternoon in the process.

The Greenville Darlings managed to stop the bleeding, but not before Troy mounted four runs with only the final inning left to respond.

A booming hit from Presley Hamilton set the pace at the top of the fifth for Greenville, and eventually the Greenville Darlings had loaded the bases with two outs.

With pressure mounting, Anna Claire Thomas took to the plate and slugged a hit nearly to the centerfield fence, bringing home three teammates and reclaiming a 6-5 lead.

Two more runs gave the Greenville Darlings breathing room, but clutch defensive play made the extra runs unnecessary as the team held Troy to no runs in the bottom of the fifth for an 8-5 win.

Angels fall in battle with Taylor-Rehobeth