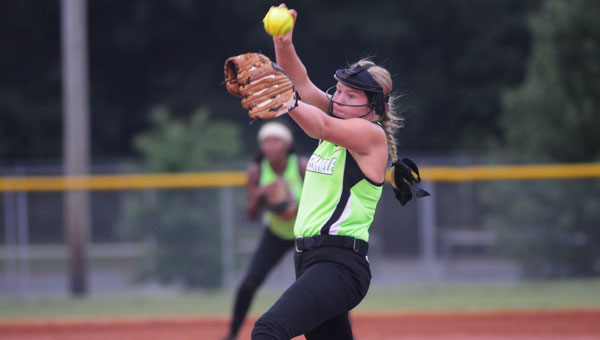 Kaitlyn Padgett winds up for a pitch in a down-to-the-wire contest against the Opp Dixie Belles.

The Greenville Dixie Belles were off to a strong start following Friday night’s convincing win over Dothan (National), but a Saturday-morning loss to Troy pitted the Belles against a strong Opp team in an elimination match Saturday evening.

Despite mounting a miraculous comeback in the fifth to close the gap, Opp held firm in the end and sent the Greenville Dixie Belles home early.

But the story could’ve ended differently, thanks to an impressive fifth-inning rally started by Jazmine Stroud.

Despite only needing one out to close the inning, Opp allowed five runs that trimmed the sizeable 10-3 lead to only two runs.

The momentum transferred to the Greenville defense as the team held Opp scoreless in the next inning for another opportunity to close the gap.

But the momentum evaporated literally as quick as a flash, thanks to a nearby lightning bolt that temporarily postponed the contest.

An Opp team returned to the diamond with their composure intact, and solid defense kept the Greenville Belles at bay for the remaining innings.