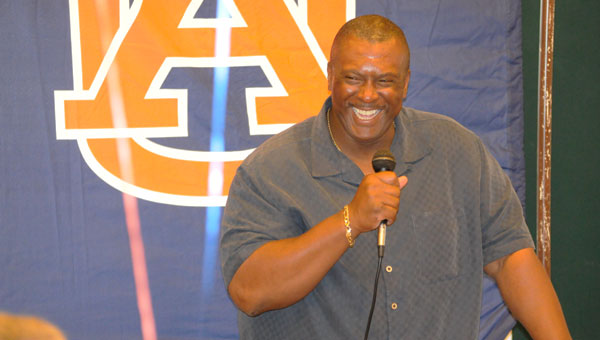 Auburn University associate head coach and recruiting coordinator Rod Garner spoke Friday night on the impact Auburn has made on his life, even after his temporary departure.

War Eagle can mean an expression of love or a declaration of war, depending on whom you ask, but it served mostly as a greeting Friday night during the annual Butler County Auburn Club meeting at Cambrian Ridge.

The Cambrian Ridge clubhouse was a sea of navy blue and burnt orange as Auburn fans filled the building for a night of food and fellowship.

But according to Butler County Auburn Club president Payne Meadows, but biggest reason for the occasion was to provide scholarships for graduating Butler County high school seniors.

“Last year, we gave our first ever Butler County Auburn Club scholarship of $1,000, and we’ve funded that again this year,” Meadows said.

“It’s been awarded for the 2015-16 year at Auburn, and our goal is to increase that.  As college costs increase, we’d like to increase the number of recipients and the dollar amount of scholarships, so any and all donations would be a appreciated.”

Harold, a mechanical engineering major who made the dean’s list for the fall and spring semester, took the stage to offer a few words of thanks to the sponsors, donors and club members who made his first year at Auburn a bit easier.

“I can’t even tell you all how much it means to have the support,” Harold said.

“Everything you all do means a lot to me, and I’m sure it will mean a lot to whomever receives it in the future.”

Auburn University associate head coach and recruiting coordinator Rod Garner spoke to the club about coming back to Auburn after an 18-year departure, and the impact the school has made on him ever since.

“That’s the thing that I try to share with the young men that we recruit.  When you make that type of commitment, it’s not just a four or five-year decision.  It’s a lifetime decision.

“And I can tell you that when I decided to become an Auburn man, it was one of the greatest decisions I’ve ever made, and it has paid dividends over and over again in my life.”

His return to Auburn was greatly facilitated by a first meeting with Auburn head football coach Gus Malzahn, whose passion for the school was apparent to him.

The decision ended up granting Garner what he called the single-most rewarding season of his coaching career in 2013.

“It wasn’t the most rewarding because of our record,” he said.

“It was because I saw a bunch of young men that didn’t have passion, had a distrust of coaches and didn’t understand brotherhood.  Taking a team that went 3-9 (0-8 in the region) the previous season and seeing them start to believe in and love one another was rewarding not only on the level of being a coach, but as an Auburn man.”

A slate of changes are in store for the Tigers both on the field and the sidelines, including the addition of former Florida head coach and new Auburn defensive coordinator Will Muschamp.

Garner spent two years working along side him, and said that he brings back “old-school toughness” and “blue-collar work ethic” to the Auburn Tigers defense.

Garner elaborated on the departure of a “special guy” in quarterback Nick Marshall, but he believes the offense is left in the capable hands of Jeremy Johnson, who has embraced the leadership role since being named to the position earlier in the offseason.

He added that Johnson has deceptive running ability despite his size.

While no starting running back has been named yet, Garner considers the flexibility and diversity a strength.

Garner closed by outlining the challenging road ahead of the Tigers team this fall, with a tough season opener against Louisville.

“We’re going to take it one day at a time, one practice at a time and one game at a time,” Garner said.

“If we will improve at every single practice and every single game, then I think we all will be happy and proud of the product that we put out there on the field.”

Veteran University of Alabama referee Eddie Conyers delivered an amusing and encouraging message to the members of the Butler County... read more