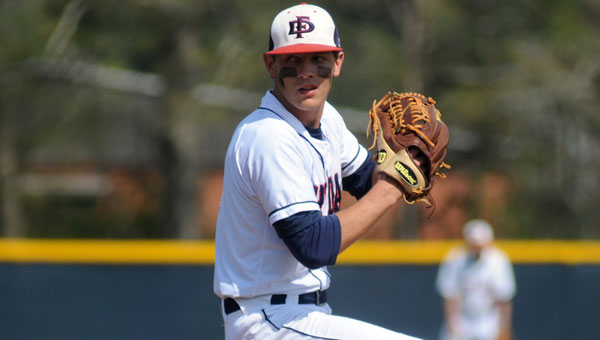 FDA alumnus Ryan Burkett will attend Marion Military Institute this fall as a left-handed pitcher on the school’s baseball team.

But there might be wings yet in Burkett’s future, as he has applied for the school’s Air Force ROTC program.

Burkett added that the regimented nature and the discipline required at Marion were appealing features.

“I’m up for it, and it’s what I want to do, so I believe I can handle the discipline,” Burkett said.

Burkett has exercised discipline throughout his high school career both inside and outside the classroom, leaving a laundry list of achievements at Fort Dale Academy in his wake.

Burkett received the Raymond Pope Award, which is awarded for excelling at two or more sports while maintaining a high grade point average.

Burkett also tied the Fort Dale career touchdown record with 43, and he led all Fort Dale tailbacks in yards per carry for three consecutive years.

In basketball, Burkett was named the most valuable defensive player two years in a row, and received a most valuable player nod during his single year.

During his baseball career, Burkett recorded 222 strikeouts, finished with a 2.10 ERA and a batting average of .395.

He was named an all-star in all three sports.

Burkett said coaches, teachers and family members alike motivated him to excel in all arenas.

“I followed in my brother’s footsteps, and the footsteps of many others, of playing three sports in school starting back in seventh grade,” Burkett said.

“That kind of helped seeing them going through it and giving me the confidence and motivation to do the same.

“Along with my love for all three sports—I love playing all three, so it might be difficult at times doing homework at midnight and waking up early for school, but looking back and knowing that I made it through and made good grades while playing the three, it was worth it.”

Burkett added that confidence from his mother and father were key, but the biggest influence was his brother, Todd.

“He always practiced with me and tried to make me better in everything,” Burkett continued.

“Watching him play well and win all of his awards put a lot on me being his brother to do the same.  My brother, father and I always went to practice on our free time, whatever sport it was.”

Burkett, who will join the Marion baseball team as a left-handed pitcher, was attracted to the school due to an established head baseball coach in Matt Downs.

“I’ve seen them play, and I liked it over there,” Burkett said.

“I know he’s turned their program around, so I’m looking forward to playing for him.  But I’m glad I an further my baseball, and I’m glad it’s Marion, where I can gain an education and start my career in the Air Force, as well.”

In between bouts of NBA 2K15 during his summer break, Burkett occasionally reminisces on the time spent at Fort Dale Academy.

Despite the numerous memories left behind, the ones made on various fields and courts are the most vibrant of all.

“I know I can play pick-up games, but there is nothing compared to a real game.  And I know I will miss that the most.”