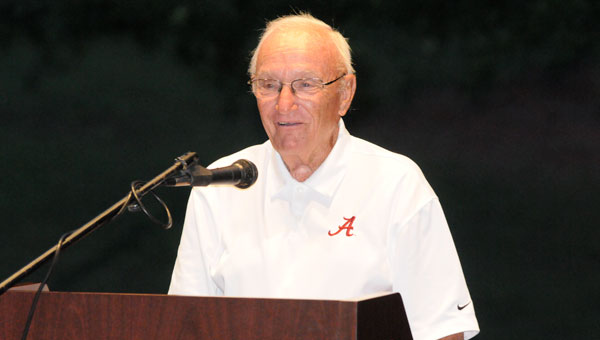 Kickoff for the Crimson Tide is still 83 days away, but that didn’t stop the Butler County chapter of the University of Alabama Alumni Association from celebrating a few days early.

With more than half a century of experience at the University of Alabama, Conyers entertained the crowd with personal—and often hilarious—memories both on and off the gridiron.

Marianne Russell, outgoing president of the University of Alabama Butler County Alumni Association, said that its that same zeal and passion for all things Crimson Tide that has made Conyers a favorite in the Greenville community.

“He’s been here several times, and so he is returning to Greenville,” Russell said.

“Bear Bryant hired him as a practice referee.  He just has stories from all of the coaches and the players, and he loves the university, and his love for the university just comes through in all of his stories.”

Russell added that she was pleased with the evening’s turnout, with guests ranging from ages 14-85.

Despite the broader demographic, Russell said that there is still room for improvement.

“It’s for Alabama alumni and friends.  You don’t have to be an alumnus to come here.  That’s a new group we need to approach.”

Before Conyers took the stage, the alumni association awarded scholarships to three soon-to-be freshmen at the University of Alabama, including Christian Jordan, Cailyn Thompson and Hayden Davis.

After delighting the audience with several funny anecdotes, Conyers shifted his focus once again to football and his several years of experience with the Crimson Tide’s most famous coaches, including Paul “Bear” Bryant, Gene Stallings and the current man at the helm of the Tide, Nick Saban.

“Bryant was a coach that I think took what he called in-betweeners and made great ball players out of them.  He related more to the scrappy, small guys.

“Coach Stallings was what you’d call plain vanilla.  He just believed in lining up and whooping the guy in front of you.  Coach Saban is a master at recruiting players.  Like he says, it’s not Xs and Os, it’s Jimmies and Joes.  We’ve got probably more good athletes than I’ve seen at the University of Alabama in a long, long time.”

Conyers also stated that he believes the university is better off now than ever before with regards to the four As—athletics, academics, administration and alumni.

He remarked on the Crimson Tide’s performance in the Women’s College World Series, as well as the zest and charisma of newcomer basketball coach Avery Johnson.

But most of all, Conyers discussed how the relationship that students and alumni form with the university is unique and ever-changing.

“You go in as a freshman, and it’s almost like a parent-child relationship, with you being the child and the university being the parent,” Conyers said.

“But now as alumni, I think that relationship has reverted back to where it started, except now we’re the parent and the university is our child.”