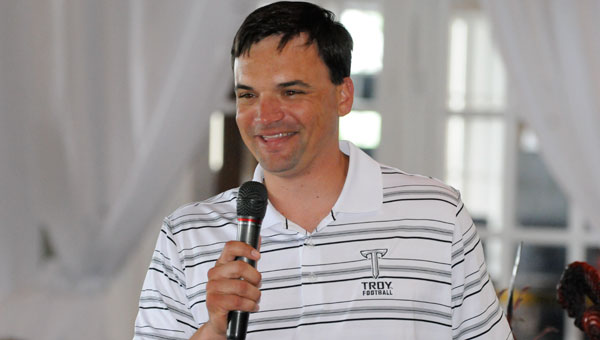 Cambrian Ridge was packed nearly to capacity as Troy fans gathered in droves for the 2015 Trojan Tour.

The tour, in which Troy University head coaches and athletic administrators take a summer road trip across the Southeast for 10 days, made its fifth stop in the Camellia City after Troy, Florence, Birmingham and Opelika.

Voice of the Trojans Barry McKnight presided over the event, which has shifted gears from being a speech-driven pep rally to more of a town hall gathering with an emphasis on community feedback.

Brown also identified two objectives for the Trojans during the summer—focus on building competitive character and moral toughness.

“We’ve got to work on competing.  We’ve got signs all over the place that say compete every day, and we’ve got to continue to do that,” Brown said.

“Our strength coach, Rafael Horton, is really putting our guys through the grinder this summer.  The NCAA allows you to have eight weeks, so for eight weeks we’re going to put them through it.

“And hopefully, at the end of preseason camp, we’ll have a group that’s ready to compete against one of the toughest schedules Troy’s ever played.”

The Trojans open the season on the road against the Wolfpack of North Carolina State, a team that early projections placed in the top 25 after winning its final three games in convincing fashion.

Brown said that winning the recruitment war and rebuilding atmosphere at Troy games was the key to long-term success for the program, but he added that his players are already on board for the ride.

“It’s a tough run, but our kids are excited about it,” Brown said.

“They’ve got good energy, and our buy-in factor has been really high.  That’s a complement to Coach Blakeney and his staff.”

Both problems have been rectified for the upcoming position, with the return of the healthy players and the signing of Daniel Peace, a junior college guard from Atlanta who led the nation in steals and ranked seventh in assists.

“He’s on campus right now and he’s showing us why we brought him here, so we’re really excited about that,” Grant said.

The team also signed Brandon “B.J.” Miller to serve as an understudy point guard for Peace, as well as 6-foot-7 forward Jordon Varnado from Brownsville, Tenn.

The basketball team still has an ace up its sleeve in Wesley Person, who was named the 2014 Sun Belt Freshman of the Year.

Though facing different circumstances, both coaches agreed that the best resource available to Trojan Athletics were the fans themselves.

“We’ve got to turn Trojan Arena into a home court advantage for us,” Grant said.

“We want to make it an uncomfortable environment when they come play us.  We’ve got to do our part—our part is we’ve got to win games, and we feel that we’re on the right path to do that.  But we also need support from our fans to come fill that beautiful arena up.”

“Anytime you start talking about coming to games, it’s a little bit of chicken and egg,” Brown added.

“It all goes back to recruiting and creating an atmosphere.  When fans come to the games, the recruits are going to be at the games and see it on TV and they see the fans in the stands.  The more people and louder it’s going to be, the better the atmosphere and the better the stadium.”