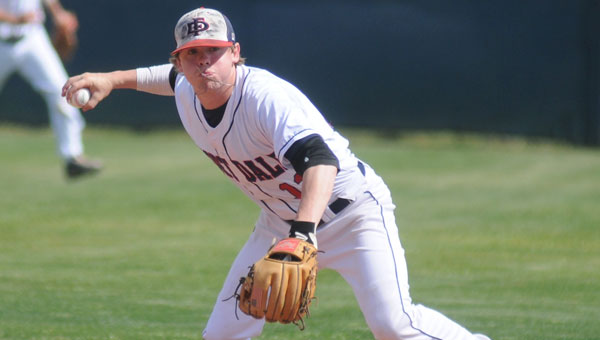 The numbers have been crunched, the results are in and Fort Dale Academy’s own Drake Cabe has been named the 2015 AISA Hitter of the Year.

Cabe, who finished the season with a batting average of .600, said that the announcement caught him entirely by surprise.

“I was in Georgia with my travel ball team whenever my dad called me, and he was reading me all of this stuff and he said I was Hitter of the Year.  And I couldn’t believe it,” Cabe said.

“Out of all the people that could’ve been chosen, they chose me.  I like it—I love it, actually.”

Cabe attributed his success at the plate to having patience and a good eye.

“But whenever I got two strikes on me, I just choked up, spread out and worked on putting the ball in play,” Cabe added.

“I tried my best not to strike out, and I just tried to find a hole and put the ball in play.”

It’s a strategy that Cabe employs to this day, as he has spent the summer with a Montgomery-based travel ball team.

“I still do that—that’s what I do in travel ball,” he said.

“I get two strikes, and I spread my feet out really wide and choke up, and I just focus on putting it in play and making the defense work and seeing if I can get on any way I can.”

Cabe is getting a great deal of mileage out of the travel ball experience literally and metaphorically speaking, as the team has traveled everywhere from Georgia, Mississippi, South Carolina and as far south as Port St. Lucie, Fla.

The competition has provided not only a new challenge for Cabe, but also a great opportunity to prepare for his collegiate career at Pensacola State.

“It’s a great experience, and I love every second of it,” Cabe said.