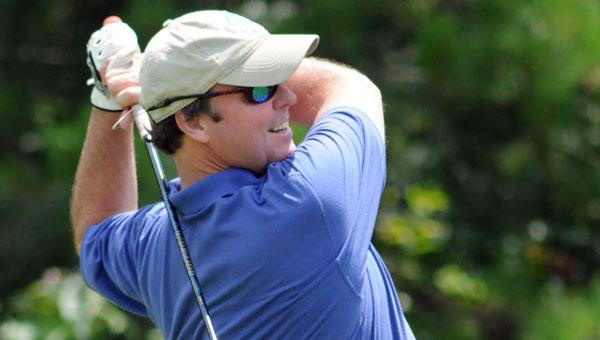 Bill Lewis was one of 40 area golfers in attendance during Greenville High School’s first golf tournament fundraiser. The tournament raised $17,000 for the use of GHS’s booster club.

Despite the late start in preparing the event, Greenville High School head football coach Josh McLendon said that the tournament was a huge success.

Participating golfers were drawn to the four-man scramble tournament due to the allure of a good time, as well as a handful of notable prizes.

The first, second and third-place teams received a prize, as well as additional rewards for closest to the hole and longest drive.

Chief among the prizes was a three-day, two-night stay at the Renaissance Hotel in Montgomery and Opelika.

McLendon said that the money raised is a solid start for the remainder of the year’s activities.

“That’s obviously not going to take care of us forever, but that’s a good start,” McLendon added.

“We’ve got several individual camps that we’re trying to take our guys to in order to get them some exposure to some colleges, but we’ll also do some team camps where we’ll get to do some 7-on-7s and some offensive line and defensive line work.  We’ll have a good, busy summer.”

One of the 40 participating golfers ended up being McLendon himself, as he had to fill in for a team that found itself short one member.

It wasn’t how he’d planned to spend his afternoon, but there are worse ways to spend an afternoon than on Cambrian Ridge.

“I was planning on just riding around and visiting, but I ended up playing and we had a great time,” McLendon said.

“I don’t play as much as I’d like to, but I do enjoy playing whenever I have the chance to get out there.”

“With me having a late start on getting the forms out there, we hope to do this earlier next year and get everyone involved to raise even more money for next year.”

Georgiana’s annual summer basketball camp is equal parts fun and fundamentals, but every competition must have its winner. Georgiana head... read more