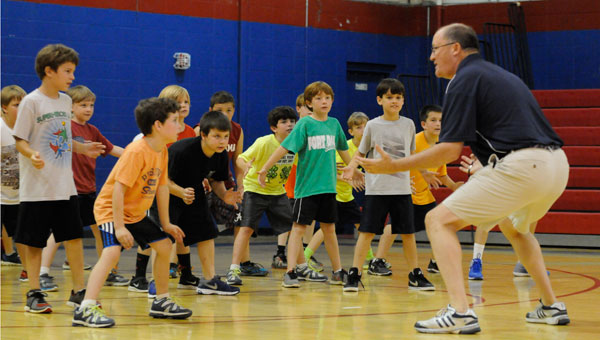 For more than two decades, Fort Dale Academy’s annual summer basketball camp has become nearly as much of a permanent fixture in the community than the man at the helm.

And if Monday morning’s start to this year’s camp was any indication, it’ll be around for a while to come.

Open to boys ages 6-18, the camp was split into two groups with younger players hitting the hardwood from 9 a.m. until 11:45 and middle/high school students taking over from 1:15 p.m. until 4 p.m.

Both camps are aimed at entirely different audiences but, to Fort Dale Academy head basketball coach Reggie Mantooth, the fundamentals are important at any age.

“We would like for them to learn some basic skills—ball handling, shooting, passing—but we really want them to have fun, too,” Mantooth said.

“We just feel that at this age, the more fun they have, the more they’re going to want to play in the future.  So we try to keep it fun, but we also want to teach them some basic skills.

Mantooth corralled a herd of nearly 50 youngsters inside the school’s gym for a number of mini-camps focused on offensive and defensive techniques, with an added competitive twist to keep things interesting.

He added that this year’s experience has been a great one so far, thanks largely to a great supporting cast.

“It’s good every year because we get the same group of coaches back,” Mantooth said.

“Marshall Watts has been helping out a long time, as well as Regina Parker, so we kind of know what to do.  And it’s always good to stay involved with the younger kids.”

Mantooth had a bit of additional help from Fort Dale varsity players, including Taylor Thomas, Luke Taylor and Cody Parker.

Taylor said that he might have enjoyed himself more than the young campers he mentored.

“It’s fun because you can interact with the children, and you know what kind of talent is coming up,” Taylor said.

“I like to just see them having fun, and I like to put a smile on their face.”

Parker has helped with the camp for four years running now, and he said that it’s as special to him now as it was when he got his first start in the sport at the same camp.

“I used to come here when I was little, and it’s just like I’m a little kid again,” Parker said.

“I get to come out here and everyone’s looking forward to Coach Mantooth’s camp.  I just love it.  It’s just a good time getting buckets.”