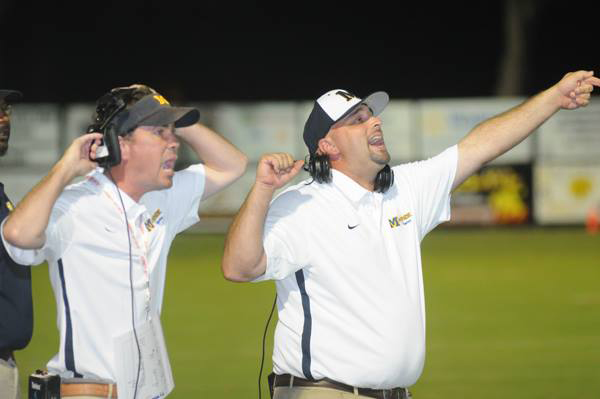 After a month-long search, McKenzie School has found itself a new head football coach.  As it turns out, the administration didn’t have to look far.

The Butler County Board of Education approved the hiring of Tony Norris as McKenzie’s head football coach Thursday night.

Norris said that he’d been contemplating the move for several weeks and, after discussing the matter with his wife, decided that it was a good opportunity to take.

But more than an opportunity, Norris said the position was an honor.

“The community has a lot of great, great people in it, and it’s actually humbling and an honor to be the head coach here at McKenzie High School.”

Norris’ coaching experience began at McKenzie six years ago as a position coach for wide receivers and linebackers, where he “got his feet wet” fresh out of college.

“They both felt like I was worth somebody teaching football to,” Norris joked.

“I had no prior experience, other than playing in high school.”

Their faith in his coaching ability led to his current career path, as Norris took the defensive coordinator position once Powell left to become Georgiana’s head coach.

“And I was lucky my first year and had some great kids to coach on that side of that ball, and I was able to be named the 1A assistant coach of the year that year,” Norris added.

Norris completed a hat trick by adding football to his already lengthy coaching resumé, which includes baseball and basketball.

Norris said that the new head football coach position doesn’t change anything as far as his other responsibilities are concerned.

“I just got married in March, and my wife and I don’t have any kids,” Norris said.  “And so I feel like I take each kid I work with in sports as my kid, in a sense.

“It is going to be a lot of responsibility, but it’s something that I’ve just got to work harder at.  But the good thing about being here at McKenzie is that I have a lot of people who are willing and eager to help me in any way possible.”

Norris said that McKenzie players and fans can expect more of the same Friday night football experience they’ve come to know and love on the field, as the Tigers will remain in the spread offense for the upcoming season.

But Norris said that there are far more important traditions to uphold.

“My job is to put a product on the field that the community can be proud of, and that’s the way we’re going to go at it,” Norris said.

“When the game ends, the community and the people in the stands can be proud of what we put out there on the field and we represent community well.”

Tigers carry on with spring training without head coach

Receiver Condie Pugh, a senior in the fall, is one of several players taking on a leadership role headed into... read more