Tigers carry on with spring training without head coach 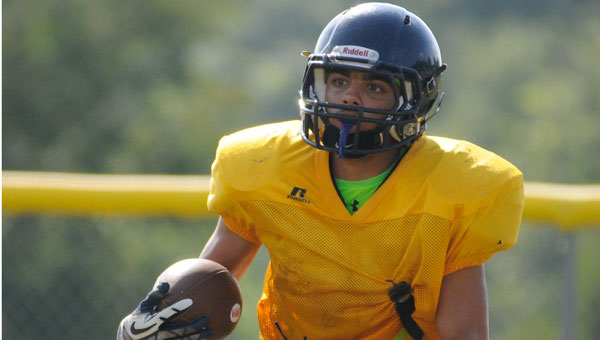 Receiver Condie Pugh, a senior in the fall, is one of several players taking on a leadership role headed into the fall 2015 season.

It’s been nearly five weeks since former McKenzie head football coach Josh McLendon made the transition to Greenville. And while the Tigers are still currently without a head coach, the team’s 10-day spring training period was otherwise business as usual.

“As far as the attitude of the kids and their willingness to work and try to get better every day, that was by far one of the best springs that we’ve had,” said McKenzie coach Tony Norris, who has filled in alongside athletic director Miles Brown and coach Matt Coghlan to shoulder the responsibility of a head coach position.

“The kids showed great attitudes and great enthusiasm—all of the intangible things you ask for going into spring.”

The enthusiasm carried the players all the way to last Friday afternoon’s scrimmage showdown with Greenville Middle School’s junior varsity squad, as well as Hillcrest-Evergreen’s junior varsity and varsity teams.

The McKenzie junior varsity prevailed against Greenville, but both of Hillcrest’s teams came out on top against McKenzie in a series of two-quarter scrimmages.

Norris said that the scrimmages were less about winning and more about simulating the speed of a real game scenario, and evaluating the team’s strengths and weaknesses before heading into summer camp.

Overall, he said that he was happy—though not satisfied—with what he saw.

“We had some good spurts on defense and some good things that happened on offense, but the willingness to learn and work every day was there, and that’s half the battle right there,” Norris added.

Norris was equally impressed with the senior leadership displayed during the 10 days, in light of losing key leaders such as quarterback Terrance Clemons and running back Ty Adams.

“They stepped up and took the challenge of taking young guys under their wings and showing them how we do things and what we expect,” Norris said.

“Our senior crew, as far as spring goes and as far as the weight room goes, has done a phenomenal job.  Now it’ll be their job to keep that leadership up going into the summer and fall camp.”

The McKenzie Tigers will get back to business with summer camp beginning on June 9.

Several members of the Georgiana community are making a concerted effort to give Butler County’s youth one more outlet for... read more