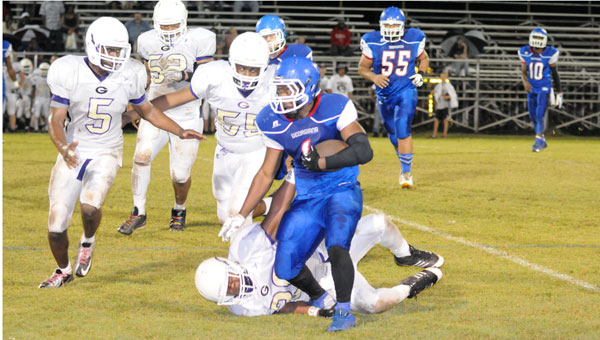 Running back Cameron Longmire stiff-arms a Goshen defender to the ground on a powerful first-down run.

The junior varsity and varsity Georgiana Panthers teams closed spring training with a pair of wins against the J.F. Shields Panthers and the Goshen Eagles, respectively, Thursday night.

The former team had little trouble putting J.F. Shields away with an aggressive ground game that mounted four touchdowns in the blink of an eye.

Meanwhile, defensive lineman Tyler Henderson and company met Shields in the backfield more often than not, keeping the opposing Panthers well out of the red zone for the duration of the contest.

The stingy defensive play, combined with an overbearing run game, led the junior varsity Panthers to a 24-0 win over Shields.

But the varsity Panthers would face a much tougher test in the Goshen Eagles, as Georgiana head football coach Ezell Powell expressed concerns about a relatively young defensive unit.

The Panthers lost 10 seniors and defense was hit hardest of all, with three loses to the secondary, one outside linebacker, one inside linebacker, a nose guard and a defensive end.

But the underclassmen answered Powell’s challenge and then some.

“I was pleased with the effort from both my younger guys and my older guys,” Powell said.

“I thought they both got out there and competed really hard.  I like the way both groups flew to the football.”

The Panthers’ offense found it more difficult to establish a rhythm.

Quarterback Jacquez Payton led the Panthers to merely 2 and a half yards away from the end zone, before being backed up 23 yards due to costly penalties.

“Offensively, we’ve got some execution things to get corrected,” Powell added. “We moved the football — it’s just that on one drive with the older guys, we didn’t cash in.  We had some penalties that put us in a bad position; and we’re not the best throwing team in the world, so when we get backed up it hurts us.”

Fortunately, the Panthers’ defense came through with a game-changing fumble recovery to give the offense another shot at paydirt.

Payton wouldn’t be denied a second time, turning on the jets with a reverse scramble from coast to coast for a touchdown.

“I was proud when they got it the next time and they drove it down the field.  Jacquez was being Jacquez for us, and he made a play and got it into the end zone,” Powell said. “If we can stay ahead of the sticks, we can do a pretty good job of executing what we do and put it in the end zone.”

The Panthers will resume preparation for the fall season in two weeks.