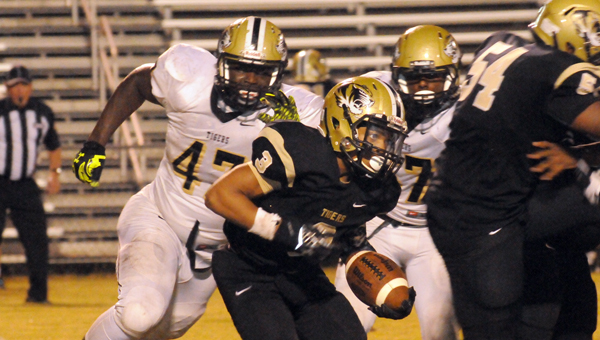 Not even rain showers and a lightning delay could put a damper on Greenville High School’s spring scrimmage Thursday night at Tiger Stadium.

The scrimmage marked the debut of new head coach and GHS graduate Josh McLendon, who was hired in mid-April to replace Patrick Plott, who resigned to accept an assistant coaching position with Auburn High School.

The first-year head coach, who led McKenzie School to the second round of the playoffs last season, said he was pleased with his team’s performance given the short amount of time they’ve been together.

“I thought it was good,” McLendon said. “I feel like both sides of the ball have come a long way from where we started, and I think we’re in good shape heading into the summer.”

The Greenville offense managed to put two touchdowns on the board despite a slick football and sloppy field conditions. Both were scored by wide receiver Jabez Sims. The first came on a 60-yard end-around run. The final score came as the clock ticked down to zero and was from a yard out.

“We don’t have a lot in offensively,” McLendon said. “We have a couple of runs in and a couple of passes in right now. I wanted to keep things pretty simple this spring, so that probably gave the defense a little bit of an advantage. It’s tough when the defense knows what to expect and almost knows what the play is even before you call it.”

“I saw some good things,” McLendon said. “We need to get better up front, and our quarterback needs to do a little better with his reads, but we’re going to get there.”

McLendon said he was pleased with the play of his defense, which forced several turnovers, including an interception by Jaquaun Lewis.

“Defensively we played really hard,” McLendon said. “Coach (John) Jones does a great job of making sure they know exactly what to do in each situation. They made plays.”

“We didn’t really work on special teams this spring, so that’s going to be a major focus this summer,” McLendon said. “It’s one of the most important, if not the most important, parts of the game. I think we can be real good on special teams. Alvarez has worked his tail off and he’s consistently kicking 30 and 40-yard field goals. He’s going to do a good job for us.”

The Tigers will wrap up spring training Saturday with a morning practice.