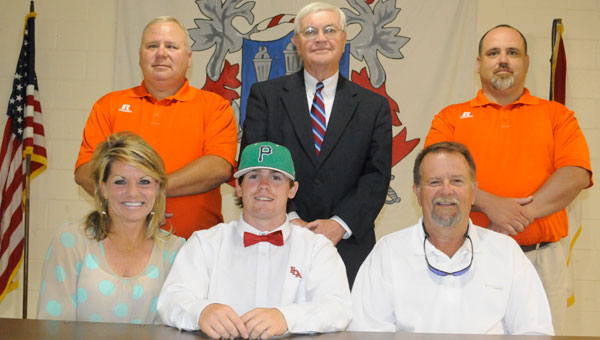 For Cabe, who began playing baseball at the age of 10, the past several years of his life have served to confirm one thing —he and the sport of baseball are inseparable.

“I started here in Greenville at the city fields, and then I got into travel ball when I was 12 or 13,” Cabe said.

“Whenever I got into travel ball, that’s when I knew that I liked this sport — this is what I want to do. I wanted to try to play college ball, so I gave it my best shot.  I worked really hard at it.”

The shortstop/pitcher’s hard work paid off in dividends during the 2015 regular season, as Cabe connected at the plate more often than not with a remarkable .600 batting average.

But Fort Dale Academy athletics director James “Speed” Sampley said that Cabe’s athletic ability was only half of his charm.

“We’ll lose leadership on the baseball team by losing him,” Sampley said.

“People talk about skills all the time, but it’s harder to replace leadership, and that’s something that we’ve got to work on from there.  But we’ll miss him, and I hope he does very well where he’s going.”

For Cabe, the feeling is reciprocated. Of the three schools he’s attended — including Lowndes Academy and Stanhope Elmore High School — it’s Fort Dale that feels most like home.

“Out of the three schools I’ve been to, this is my favorite one because all of the teachers make you feel welcome the first day you come.  The people always come up and introduce themselves, and they make you feel at home.

“That’s what I like about it here. This is my second year here, and they say ‘man, it feels like you’ve been here since first grade.’”

After having an opportunity to visit the staff and facilities at Pensacola State, he’s fairly sure that the school will continue to scratch his itch for tight-knit, personable atmosphere.

“I met the whole baseball team, went out there and practiced a little bit, threw it around and met the coaches,” Cabe added.

“(Pensacola State head assistant) Coach (Bruce) Larkins took my parents and me out to eat and we had a good time.

“I loved it.  It was just a nice atmosphere.”

Though he’s received a lot of advice in his final days at Fort Dale, the most useful he has received — courtesy of former Fort Dale baseball coach Josh Beverly — is also the simplest.

“Coach Beverly taught me to be responsible.  Down here, I always usually ran to him if I had any questions or if I left something at the house,” Cabe said.

“He just told me to be responsible, make your coaches proud and do your best down there.”

Running back Cameron Longmire stiff-arms a Goshen defender to the ground on a powerful first-down run. The junior varsity and... read more