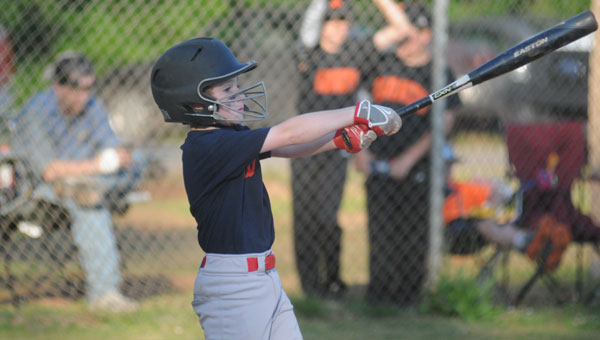 Thomas Williamson swung for the fences to propel the Red Sox to a 8-7 win in a thrilling matchup against the Braves Monday afternoon.

Several teams across all Dixie leagues put on a great display Monday night, but few were as gripping as the contest between the Red Sox and the Braves as the two Minor-league titans traded blows for an intense five innings.

Daven Williamson and Cade Lake each recorded a hit and a run scored to give the Braves momentum, but a combined effort from Tyler Mallory, Ethan Alford and Ford Sloane propelled the Red Sox to a close victory.

The three Red Sox players posted a hit each and combined for a total of four runs scored.

Williamson led all Braves with two RBIs for the evening.

Christopher Stinson was a blur on the mound with 11 strikeouts in five innings, dismantling the Giants’ offense and leading the White Sox to a 7-2 victory.

Stinson was equally effective on offense and also recorded two hits and a run scored.

Freddy Fails was the biggest offensive spark of all for the White Sox with a  homerun that permanently swung momentum in his team’s favor.

Cole Whiddon, Clay Whiddon and Garrett Fullington each pitched in to mount a response for the Giants, but the damage had largely been done.

Braves of a different sort were embroiled in another heated contest, this time with the Cubs.

An offensive flurry boosted the Braves early on with a homerun from Chandler Little and two more from Austin Beck.

Two more hits from John Sessions and a much-needed triple from Willie Taylor furthered the cause, but the Cubs responded in kind with a homerun from Jack Brogden.

The ball appeared to be moving in slow motion for the Cubs as Eason Pierce, Matthew Gregory and Joseph Tolson each found success at the plate twice to give the Cubs a slight edge and, ultimately, a narrow 9-8 victory.

Homers were a dime a dozen in the battle between the Angels and the A’s, but the Angels outlasted their competition for a close 6-5 win.

Eriyon Roper and Xavion Williams led the charge for the A’s with two hits and a homerun each that gave the A’s offense legs early on.

But the Angels received a wealth of contributions from Hunter Sexton, Noah Ray, BJ Bedgood and James Pool—with home runs from the former two—that set the pace for the Angels throughout the afternoon. Morgan Heath also recorded two hits and a run scored for the A’s.

When awards were given out during McKenzie’s athletic banquet Monday night, one group of athletes was noticeably omitted. McKenzie head... read more