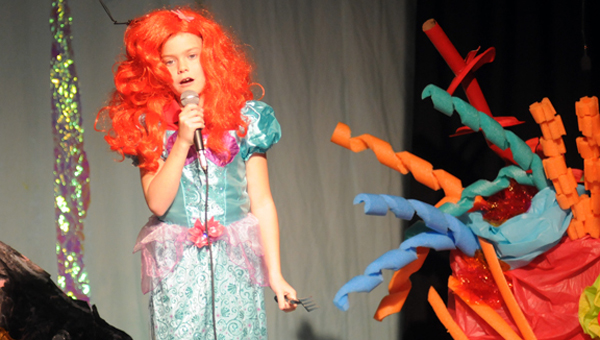 The magical undersea world of Disney’s “The Little Mermaid Jr.” came to the cafeteria of W.O. Parmer Elementary School Thursday.

Members of the school’s drama club, which was established in 2008 by teachers Suzanne Smith and Ginger Norman, entertained their classmates with the musical, which is based on the 2008 Broadway production and the 1989 animated feature film.

The Little Mermaid, Jr. takes place in a magical kingdom beneath the sea, where a beautiful young mermaid named Ariel longs to leave her ocean home to live in the world above. But first, she’ll have to defy her father, the king of the sea, escape the clutches of an evil sea witch and convince a prince that she’s the girl with the perfect voice.

Smith said the students began working on the show at the start of the school year.

“The Drama Club is open to all W.O. Parmer first and second grade students,” she said. “The club meets after school once a week starting at the beginning of the school year. Auditions are held and all club members audition for their role in the spring musical.”

Smith, who sponsors the club along with Sonia Crigger, said the club typically has 25 to 45 members.